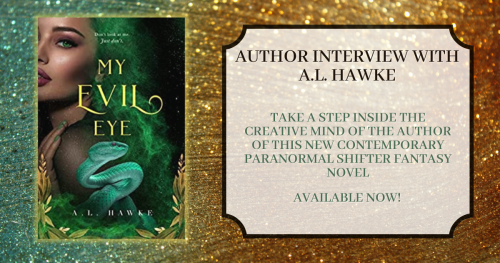 Let’s get to know  A.L. Hawke, Author of My Evil Eye, a contemporary, paranormal, shifter, fantasy novel that’s sure to slither into your heart!

Q: So, where are you from and what genre do you write about?

Q: How long have you been writing or when did you start?

January will mark my fourth year. I’m planning on releasing my fourteenth book, a novella, in another month. Then I have plans for a paranormal angel romance in a few months. That’ll make fifteen. Can you believe that?! (Congratulations!)

Q: Why paranormal/urban fantasy? What drew you to the genre?

I’m obsessed with love and death. Morbid, but true. That’s a theme in every story. Even when I started writing science fiction, The Candy Savant Series, the two books were “gothic” sci-fis derived from Frankenstein about a dystopian world of female geneticists building people in their search for immortality.

Q: What comes first for you — the plot or the characters — and why?

Characters. If my main character doesn’t move me, I don’t have a story. The plot is secondary. In fact, I don’t outline my books.

Q: What’s your favorite type of paranormal creature and why?

I suppose with my new release, My Evil Eye, mythological monsters with snakes in their hair are pretty cool. In my take on the myth, Medusa is a shifter. So this new release is a contemporary paranormal shifter fantasy. Of course, I love witches too from my Hawthorne University Witch Series. As far as vampires, and you guys, I like reading about vampires more than writing them—I’ve only written one secondary character that was a vampire in one of my books. (That’s ok, we love shifters too!)

Q: Tell us about your heroine/hero. What inspired her/his quirks and struggles?

Medusa in my new book My Evil Eye is like Adrian (from the movie “Rocky”) meets Frankenstein. Medusa is split with part of her being shy, loving to read alone in the library, while the other half of her is a monster, cursed by Athena and the Greek gods, tearing people apart. When she falls in love with Asher, she’s faced with two things threatening her love: falling in love with a man that could literally be torn apart by her other self (or by the gods threatening her); or by abandonment from Ash’s inevitable death; because even when a mortal man loves an immortal, the mortal man eventually will die. Incidentally, this second threat over love is what drives her best friend Cora, the goddess Persephone, completely crazy in my other novel CORA. I think it’s one of the reasons why Gorgi and Cora get along so well together as friends.

Inspiration for Medusa came from her origin myth. I was disgusted to learn in Greek myth that she was a model priestess raped by Poseidon and then punished by Athena for Poseidon’s crime. So I wanted to expand this injustice into a battle that was happening here in Florida in the twenty-first century. The other source of inspiration was simple. There’s a monster inside of all of us that we struggle to control. (So true!)

Q: Would you and your main character get along?

With Medusa, absolutely. She’s charming, funny, and kind. I’d just avoid her when she changes. Cora’s a bit edgy, but we’d probably do okay together.

Q: Which of the characters do you relate to the most and why?

There’s aspects, but not one character I relate with more than another. Cadence, from my witch series, reminds me of my college years and my joy of discovery and struggles with fitting in; Gorgiana (Medusa) reminds me of my insecurities as an adult and the challenges of dealing day to day with the negative baggage we’re all dealt with.

Q: What is a significant way your book has changed since the first draft?

I alter scenes, chapters, and endings quite a bit before my books are published. I write revision after revision until I’m happy with the final draft. It really depends on the story as to how much editing is done. But, believe it or not, my main characters don’t change at all. The core of who they are isn’t altered because it’s their personalities that create my stories.

Cadence in my witch series is a great example. The original narration of Broomstick was by a different character. I can’t recall who, but I remember the main character didn’t feel right and it left the book stagnant. It wasn’t until I created my character Cadence that I found the perfect beat and quickly wrote the first draft; then I moved onto the other two books and my novelette prequel Beltane Fire.

Q: Where can our readers find you?

You can get a copy of My Evil Eye here or from my website:

This site uses Akismet to reduce spam. Learn how your comment data is processed.