Descended from Dragons
by Tricia Owens
$0.99 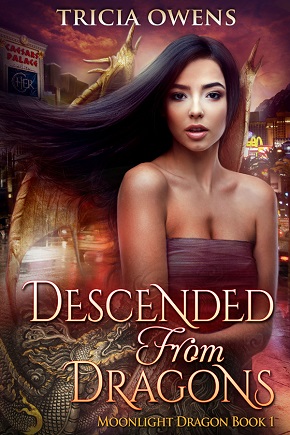 Beneath the glitz and glamour of Las Vegas lies another city. A secret city in plain sight, full of warlocks and demons, shape-shifters and golems. A city that feeds off the chance magick that is generated by gamblers and which is ruled by mysterious beings called the Oddsmakers.

It is in this strange underbelly of the occult that Anne Moody runs a cursed pawn shop for the desperate, the curious, and the magickally inclined. Though the job is boring, it keeps her under the radar. None of her customers have any inkling that she is a dragon sorceress with a power that's been feared throughout history. However dragons are no help when a stone statue ends up in her shop that is more than it appears. The statue is a gargoyle named Vale, who is shrouded in mystery and secrets. When she learns that Vale is possessed, and that the person responsible for cursing him plans to take over Las Vegas with a horde of demons from Hell, Anne realizes it is up to her to defy the Oddsmakers and save the city, and possibly the world. 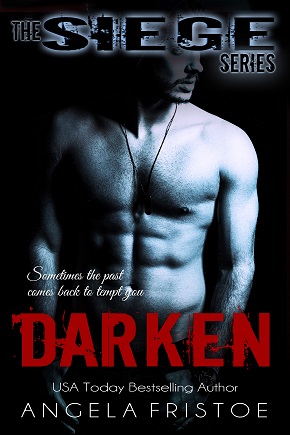 Gavin Walker is still reeling from the death of his fiance, Lela, two years ago. As determined as he is to crawl into the grave with her, his family keeps dragging him out. Now, he’s dealing with sweet, sexy Coraline Evans on a daily basis and it only makes it harder to control the monster hidden within him.

Cora hasn't forgiven herself for causing the accident that took her best friend Lela’s life. She tried running from the guilt and Gavin’s accusations, but that’s no longer an option. She’s been having visions of someone trying to kill Gavin, and Cora is determined to stop them, even if it means Gavin breaking her heart in the process.

Darken is a full-length standalone novel in The SIEGE Series. 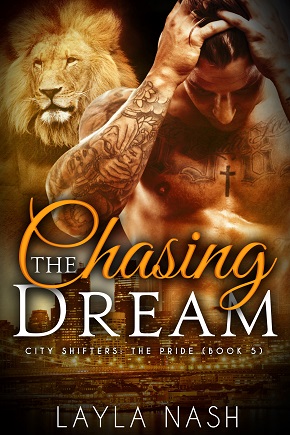 Ivy Peterson is close to finishing off the men responsible for experimenting on her and dozens of other shifter kids when a rogue pack puts her in the Auction. She's resigned to a very short run as someone's unwilling wife, until she sees Edgar Chase in the crowd. The werelion looks as adrift as she feels after losing her mate.

Edgar knows he'll never love again after his mate's death, but when he sees the haunted girl at the Auction, he can't help himself and fights to save her. Ivy holds the key to many of the mysteries the Chase family faces — and she might even hold the key to his broken heart.

Ivy just wants to finish off the evil entrepreneur who funded the experiments. If the Chase brothers want to help her with that, she won't object. But as trust grows into something more between her and Edgar, Ivy wonders if vengeance is all there is after what she's suffered. He shows her something more, something better. Will their wounded hearts heal and love again, or are they chasing different dreams?

My memory is different from yours. Over time you lose sight of people and places, dates are like the frayed edges of a painting that you will never see again. The faces and events still haunt me as if they happened yesterday. I remember every life I have taken for almost two thousand years.
For a long time, with our numbers growing, we had known safety. Throughout history, there had always been stories about us. Many believed them to be old wives’ tales. Never once did I believe our numbers could lead to our downfall.
I have lived many lives and in all of that time, this was to become my darkest moment. The year was 1941 and war raged across Europe. Humans now traveled great distances to wage war on one another. The latest conflict had taken on a new face, a face of evil. One man had taken a sign of peace and placed it on a blood-red colored flag, which his troops followed into battle. Like locusts, they consumed everything in their path and invaded far off lands with little resistance.
As the war spread further, our clans divided into smaller groups to evade capture. We were forced farther east into colder, more hostile territory. Safe hiding places to sleep had become harder to find. I knew the day would come when we would be trapped, but never in my wildest dreams would have imagined it happening as it did.

NEED is a sexy, fun, and at other times suspenseful series where each episode tells the story of the inhabitants (some human, some not) in the city of Desire, where seduction and sex have no rules in their need for love.

Chris is straight, or so he thought, until hunky and mysterious Kevin seduces him and introduces Chris to a whole new side of life. Chris knows he has to tell his girlfriend Lisa, but before he can muster up the right way to do it, she unexpectedly pays him a visit and instead of getting mad—she wants to watch.

Lisa has never told Chris of her ménage fantasies, but after catching him with another man—they are all in for a big surprise.

Kevin plans to make both Chris' and Lisa's fantasies come true—but he has a secret—a BIG secret. When Chris and Lisa spend the weekend at his cabin in hopes of learning more about him, little do they know that his secrets are more than they ever bargained for.

She’s never bowed to anyone, but he’s determined to have her on her knees.

Kara Hart has lusted over Drago Arrington, a ripped and powerful dragon shifter, since he first looked down on her from his throne. With a war brewing, she chose to battle against his kind. That meant staying away from the one man dominating her every desire – even though it’s left her completely at his mercy. When Drago has a chance to have this strong-willed spitfire’s complete submission, he makes her a deal she can’t refuse. Kara caves to the dark temptation warring within her and attempts to play a role she’s never dared to fantasize before.

Little does she know this contract is very much one sided. Drago needs an heir and he’s convinced Kara will give him exactly what he craves. It only takes one taste for him to realize she’s the greatest treasure he’s ever owned; he’s not letting her go.

When the sparks kindling between them ignites to flames, will Kara realize she’s playing with fire? Or will her struggle only end with her being the one to get burned?