Moon tarot cards are very popular among beginner and seasoned practitioners alike. And it comes at no surprise given the wealth of spiritual symbolism tied to this very special heavenly body.

The moon, in all her many phases and cycles, has long been a symbol in many cultures and spiritual paths for the divine feminine.

We’ve created a list of our top 5 favorite decks for moon tarot cards below, along with a quick guide to moon symbolism.

Tip: Bookmark this page for a quick reference sheet! 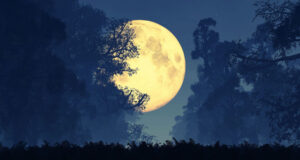 Because of the 28-day lunar cycle and her effect on the tide, the moon is believed to be a wholly feminine energy. It is believed that a woman’s 28-day average menstrual cycle can be influenced by the full moon. Many cultures also view the ocean as the Earth’s womb, from which all life originates, just like a woman’s womb.

Furthermore, it is even said that the full moon looks like a woman’s pregnant belly.

But the moon doesn’t just represent motherhood. She represents every aspect of the divine feminine, from the sexual prowess of Aphrodite to the wisdom and experience of the old Crown. 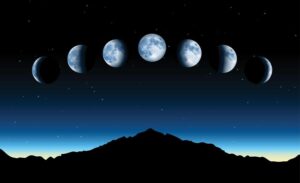 The four lunar phases are believed to represent the constant cycle of growth and decline, both physically and spiritually. In order to grow, we must let go of things which no longer serve us, like a crab shedding its shell or a snake shedding its skin.

The new moon is dark. We cannot see her. This is a time to sit quietly and reflect. Like the snake shedding it’s skin, removing and releasing old burdens is hard work, but you did it! Now it’s time to take a well deserved rest and reflect on what you’ve achieved.

This is a good time to look to the future. Set new goals and start new dreams for yourself.

The moon is growing!  This is the time to stay motivated and strengthen your resolve. Keep working on your goals.

The moon is at its biggest and brightest. She is at the height of her power. It is time to realize the fruit of your labor. Even if your goals are not complete yet, it’s time to look at how far you’ve come and feel proud of yourself. Celebrate your achievements, even if they’re small.

The moon is getting smaller. It is time to re-evaluate your plans and purge what isn’t working. In other words, its time to shed that skin again. You are growing and need to make room for those improvements.

This can mean letting go of toxic people, bad relationships, poor habits, projects that no longer interest you, negative energy, and anything else that isn’t serving you in a positive way.

Moon Tarot Cards: The Meaning of The Moon in Tarot

The moon, as well as the divine feminine, are also symbolic of our inner intuition, our moods, our feelings, illusions, and our mental health.

When the moon card comes up in a tarot spread, it is often to warn us of an illusion or a deception. Something or someone is not what they seem. This card reminds us to trust our intuition. If something feels wrong or too good to be true, it probably is! 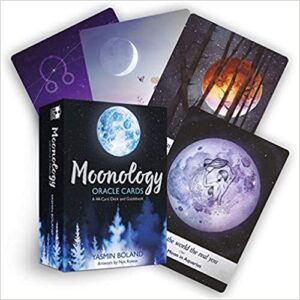 A personal favorite, these oracle cards use every phase of the moon + zodiac cards to help read the energies affecting you. The artwork showcases the natural beauty of the moon. (Get it from Amazon) 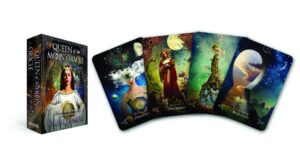 #4. Queen Of The Moon Oracle Cards by Stacey Demarco

Perfect for those who love highly-fantastic artwork. This deck is sure to inspire the imagination with its dream-like scenes. How you interpret this deck leaves a lot open to the reader. (Get it on Amazon) 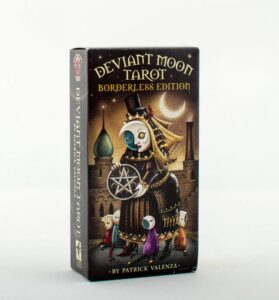 The artwork in this deck almost looks like it was inspired by Tim Burton. Highly imaginative and a little spooky. This deck is a fun one to play with while still staying within the traditional arcana setup. (Get it on Amazon) 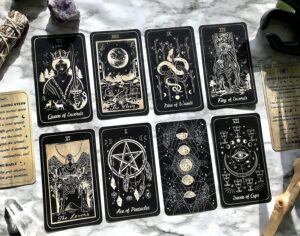 Latin for ‘moon dreams’, this beautifully haunting deck combines the traditional Rider-Waite-Smith symbolism with celestial and astrological elements. It’s a splurge, but one that’s well worth the aesthetic. (Get it on Amazon) 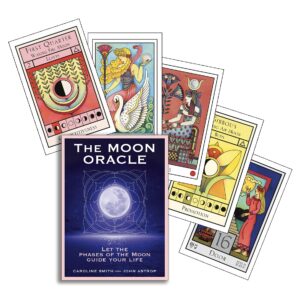 #1. The Moon Oracle by Caroline Smith and John Astrop

Smith and Astrop have re-imagined their beloved Moon Oracle deck with a whole new system that utilizes every facet of lunar astrology. This deck is a cool one for seasoned practitioners to bring something new to their skill set. (Get it on Amazon)

Which of these moon tarot cards is your favorite? Let us know in the comments.

Like this article? Check out The Meaning Of Tarot Cards For Busy Women

Werewolf Anime: Get Your Claws Stuck Into These Furry Favorites