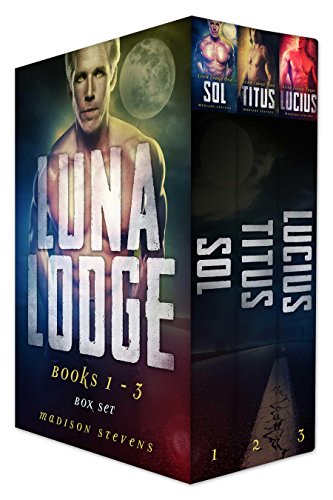 Three hybrid super-soldiers. Three women destined to be their mates.

Kate Walker has had her fill of men. Her ex only used her to get to her best friend, and now her new boss seems to go out of his way to tick her off. It doesn’t help that he’s drop-dead gorgeous and built like a god. She just can’t deal with his hot and cold attitude.

As the leader of the genetically engineered hybrids of Luna Lodge, Titus knows getting too close to mouthy Kate isn’t really a good idea. Too bad he can’t seem to get away from her or get her out of his head. Everything about her keeps drawing them together, and his ability to resist her is weakening daily.

Their shared attraction is put to the test when the dangerous Horatius Group makes its latest move against their former property, Titus and his fellow hybrids. When Kate is caught in the struggle, Titus will have to face a living nightmare or risk losing her forever.

Hannah knew taking a job with the genetically engineered hybrids of Luna Lodge would be interesting. Unfortunately for her, the revelation of the hybrids’ true nature to the world and attacks by their creators, the Horatius Group, have left her living at a compound that really doesn’t need a party planner anymore.

Faced with the loss of her job, she comforts herself by trying to act as a kind ear to emotionally troubled hybrids, but she finds herself drawn to the scarred and stoic Lucius. He, however, seems more interested in getting rid of her than being with her.

As the acting head of security, Lucius knows he can’t lose focus, especially with their enemy having already struck at them twice. His attraction to Hannah both confuses and frustrates him. Even if he’s prepared to give in, he knows there’s no way she’d really want someone as messed up as him.

The past rarely stays buried. Soon, Lucius and Hannah confront a darkness that threatens to consume them both. 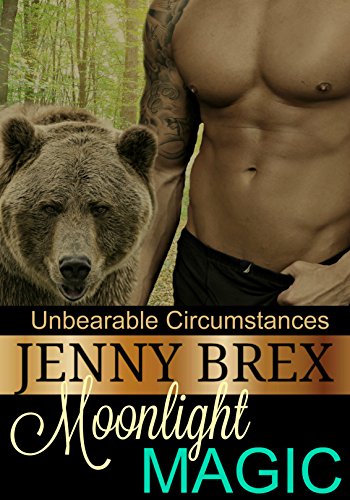 She was raised to be a socialite, a seen and not heard trophy wife. She never questioned her position. It’s simply how things were done in her world. Women like Savannah didn’t associate with swamp-loggers. They were deemed unworthy swamp-rats. She was a hard-candied woman, with no hint of a softer side.

Camden Savary moved to Louisiana to start over and grow a business. It was gritty work logging the Atchafalaya swamps, but he wasn’t afraid to get dirty. After a mixed-up and twisted blind date goes wrong, Savannah-Ansley Barrington leaves a bad taste in his mouth. She might have a slamming body full of curves and spice, but her personality leaves him cold. He’s more than happy to run the other way, until he realizes he can’t stop thinking about her. Pure animal magnetism draws him back. His bear is convinced there’s more hidden beneath her glossy surface.

Can a spoiled Southern belle and a swamp-logging shifter find similar ground? Or will their conflicting lifestyles chase them in opposite directions? (Standalone read. No cliffhangers.) 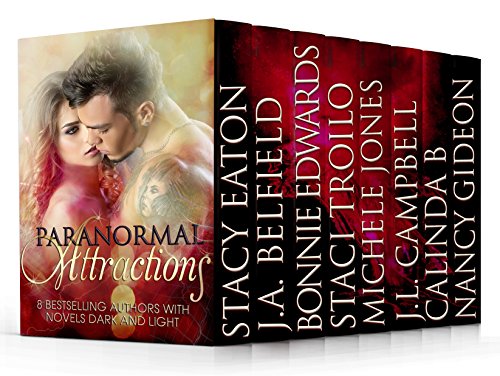 Vampires, sexy ghosts, gargoyles, mummy’s curses and a secret magical society are some of the fabulous paranormal twists you’ll find in PARANORMAL ATTRACTIONS, a boxed set of 8 steamy romances brought to you by USA Today Bestselling, Amazon, Barnes & Noble bestselling, and award-winning authors. Lose yourself in these light and dark paranormal stories that are only around for a short time.

My Blood Runs Blue – USA Today Best Selling Author Stacy Eaton
Officer Kristin Greene’s life is turned upside down when she begins to investigate a homicide and finds that killer is something out of her nightmares. What will happen when Julian and Alexander introduce Kristin to the world of vampires?

Instinct – J.A. Belfield
Werewolf Sean Holloway treats the village marketplace like a sexual buffet, until his instincts guide him toward the unique scent of the nonchalant Jem Stonehouse. Despite his pack's rules, he wants her—an attraction that can bring only danger for Jem. Will Sean defy his own Alpha to save the woman he loves?

Parlor Games – Bonnie Edwards
Carrie MacLean and Matt Crewe have secret needs when they arrive at Perdition House for a sexy bachelor auction. Can love survive the mesmerizing spirits of the hookers who once lived and worked in the haunted bordello?

Love Set in Stone – Staci Troilo
Perched above Pittsburgh, a gargoyle spends centuries as a protector of humanity while he waits for the one who will break his curse and free him from his stone prison. When he finally finds her, her life is in jeopardy, and he realizes he may face eternal damnation to save her life.

Romance Under Wraps – Michele Jones
The Carnegie Museum of Natural History gets an Egyptian installation, and it seems to come with the ubiquitous mummy’s curse. Death and destruction abound. But the real curse is on the mummy’s advisor—he must teach the mummy how to pass forty-three judgments or find the reincarnated queen and win her love—or they are doomed to continue reawakening every century to try all over again.

Phantasm – J.L. Campbell
After losing her husband in a tragic accident, Josette is convinced she's on the road to recovery—until Dwayne starts appearing to her in ways that take her to the edge of terror and back. Can Mario Browning, a persistent and perceptive man, save her from falling into a dangerous abyss between the world of the living and the dead?

The Beckoning of Beguiling Things – Calinda B
Can 24 hours really change your life in magical ways you never imagined? Marissa Engles is about to find out, when she heads to Las Vegas, meets sexy, Thunder and Lightning dancer Chris King and unwittingly unleashes the force of a secret, global, magical society known only as the Numina.

Remembered by Moonlight – Nancy Gideon
The deadly leader of a shape-shifter clan with no memories of who he is and a dedicated cop hiding a heart-breaking secret face impossible odds in steamy New Orleans that conspire to pull them apart. Because the enemy they pursue . . . might be him.

Gabriel is a Stone Bear—one of the the elite shifters trained by the Lionshead Mining Consortium to protect their precious goods. He's given up almost everything to be the best at his job, including the chance to take a mate. But after meeting his boss's new assistant, he can't help but wonder about the possibilities. Gabriel can withstand just about anything a shifter can throw at him in a fight, but when it comes to this strong, gorgeous, and witty woman, he finds himself weak in the knees. Could she truly be the one?

Caia Rowan is tougher than she seems. Hired straight out of school to go through training as a police negotiator, she's seen her fair share of the ugly side of society. So when she's offered a job in Genesis Valley, the harsh lifestyle and brutal nature of its inhabitants doesn't faze her. But the tall, utterly intoxicating, and surprisingly well-mannered bear shifter she's partnered with has the butterflies in her stomach doing circus acts.

As the pair investigate a series of odd occurrences within the Valley, they find that they can't ignore the tension growing between them. But one wrong move could cost them not only their jobs, but their lives. The darkness invading Genesis Valley is more perverse than either of them suspected, and it will take the power of their bond to burn it away. Can they survive the journey, or will the brash actions of one doom the other? 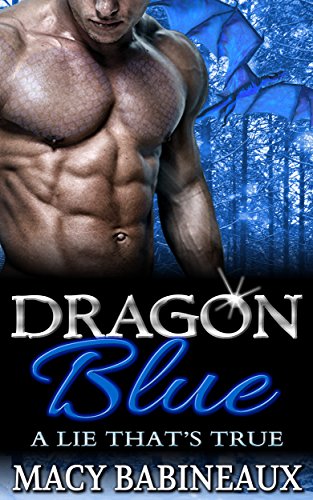 Did you ever wonder if your life wasn’t meant for something else?

Miranda Betts works as a waitress in a roadside diner in Oklahoma. Her life will change when a mysterious female customer leaves an ornate necklace in lieu of paying her check. Later, alone in her trailer, she tries on the necklace and is transported to a strange land full of people who can shift into other creatures, including fearsome dragons. And everyone thinks she's someone she's not.

Corban Everfrost leads the clan of blue dragons and rules the Icelands after the mysterious disappearance of his father. While investigating the appearance of strange interlopers from another world, his sister informs him that he is to be wed to the daughter of the Wildfire clan who has been in exile on Earth since she was an infant. Corban wants nothing to do with a new bride or the Wildfires. But when he sees the dark, fiery woman brought to his world via a magic necklace, she stirs something within him.

At first, Miranda thinks Corban is a jerk. He thinks she's an outcast from a clan he despises. But soon they will learn each other's secrets, and as they learn to love each other their relationship may be the key to saving all of Xandakar.

Dragon Blue is the first book in a planned 5-book series, The Dragonlords of Xandakar. It contains lots of fast-paced action, steamy love scenes, and a happy ending. 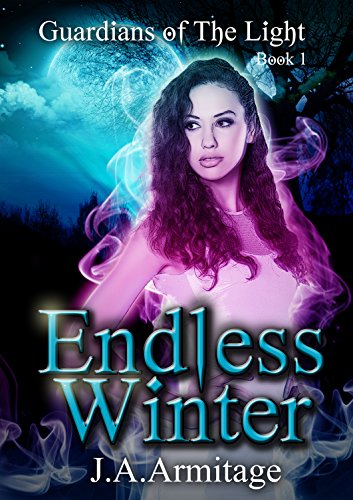 Imagine falling in love for the first time, the adrenaline, the flutters. Now imagine being told you had to have a baby with somebody else…
Trapped in an unfamiliar room with no way out, Anais has no idea just how much her life is about to change. A locked door stands between her and freedom but as she is just about to find out, the door is the least of her problems.
Anais had never believed in demons and vampires so when she is transported into a dark world that she doesn’t understand she is forced to realise that humans can be the most terrifying monsters of all. Yet in the shade of her new life she finds light in the most unexpected place of all. In this occult paranormal romance, follow Anais into the realm of The Guardians of The Light and into a mystery saga filled with temptation, loss, fear and above all love