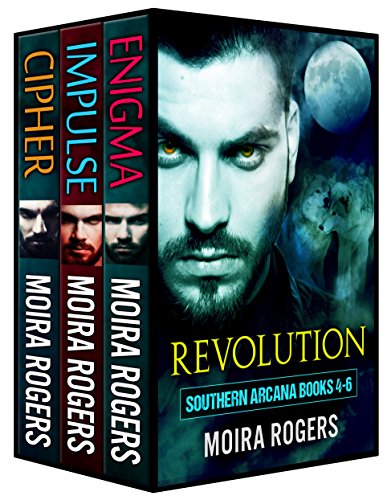 Revolution is the second bundle of full-length novels in the Southern Arcana series; Moira Rogers’ sexy, paranormal romance novels set in a world of alpha shifters, empaths, and bounty hunters. Titles include: Cipher, Impulse, and Enigma.

Kiss of a Dragon (Fallen Immortals 1)

LUCIAN
I am a Dragon Prince of the House of Smoke… and I am dying.
Five hundred years is truly enough for a man like me. A monster. Yet a ten-thousand-year treaty will die with me, if I don’t spawn a dragonling to take my place. My two brothers are no use in this task. It falls to me, the eldest by a hair’s breadth, and yet, I cannot face the horror of another sealing. Another death. Another woman’s blood on my hands.

ARABELLA
I was saved from death in a dark Seattle alley by an impossibly beautiful man who swooped in on golden wings. Now he’s taken me to his lair, opened my eyes to a world of immortals I didn’t know existed, and given me an impossible task—find him a mate. Then, and only then, will he set me free.

He needs her more than he wants; she wants him more than she should; and the fate of both the mortal and immortal worlds depends on not just repairing their hearts, but finding a Love that’s True… 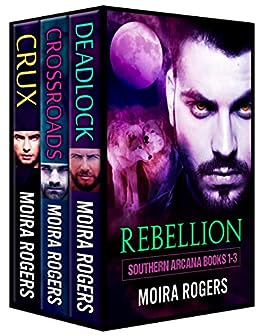 Rebellion is the first bundle of full-length novels in the Southern Arcana series; Moira Rogers’ sexy, paranormal romance novels set in a world of alpha shifters, empaths, and bounty hunters. Titles include: Crux, Crossroads, and Deadlock.

She found her happy ending, or did she?

Isabel
It was like a fairy tale. A handsome misunderstood prince with more money than he knew what to do with and he wanted her. A plain bookworm with a penchant for numbers. She should be happy, right? Then why couldn’t she get that cocky grin out of her head and her heart?

Jason
He made a mistake. We all make them. But this one cost him the only woman he ever loved. Now she’s with him. A monster hiding behind a pretty face and fancy words. He won’t let him have her even if it means becoming a beast himself.

Can be read as standalone.