Haunted on Bourbon Street
Jade loves her new apartment–until a ghost joins her in the shower.

When empath Jade Calhoun moves into an apartment above a strip bar on Bourbon Street, she expects life to get interesting. What she doesn't count on is making friends with an exotic dancer, attracting a powerful spirit, and developing feelings for Kane, her sexy landlord.

Being an empath has never been easy on Jade's relationships. It's no wonder she keeps her gift a secret. But when the ghost moves from spooking Jade to terrorizing Pyper, the dancer, it's up to Jade to use her unique ability to save her. Except she'll need Kane's help–and he's betrayed her with a secret of his own–to do it. Can she find a way to trust him and herself before Pyper is lost?

Witches of Bourbon Street
Jade Calhoun was never fond of her empath abilities. Now she's discovered she has another gift she'd rather not unwrap–magic. But when her mentor, Bea, becomes gravely ill and insists Jade's the only one who can help, she's forced to embrace her witchy side.

It's too bad she spent a decade shunning the magical community and never learned to harness her powers. Because time's run out. A trapped spirit has revealed a clue to Jade's long-lost mother. The resident angel has gone rogue and disappeared with Jade's boyfriend, Kane. And if that wasn't enough, her ex appears to be possessed.

To save any of them, Jade will need to find a way to control her inner white witch–without succumbing to black magic. Otherwise, she'll lose everything…including her soul.

Demons of Bourbon Street
New Orleans coven leader, Jade Calhoun, is embarking on a Hellish mission. Literally. A week ago her ex sacrificed himself to Hell in order to save Jade’s mother. While he suffers, Jade will stop at nothing to bring him home…even if it means working with Lailah, an angel she’s never trusted.

But the stakes are raised when Jade discovers her boyfriend, Kane, is marked by a demon. The very same one who tried seducing him right before Jade’s eyes. Now Kane’s life is on the line, and consequently, Jade’s soul is compromised. She’ll need all the help she can get, including Lailah’s, as she fights her way through Hell to save her ex and Kane—and her entire existence.

I Bring The Fire, Part 1: Wolves by C Gockel 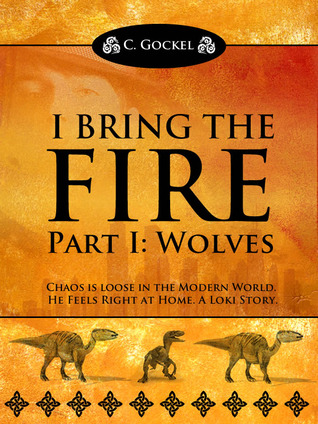 In the middle of America, on Route 44, Amy Lewis has a plan to get to her grandma's house in time for dinner. But she's being pursued by a very bad wolf.

Galaxies away Loki, so-called Norse God of Mischief and Chaos, is waking up in a prison cell, strangely without a hangover. He has no idea what he's done wrong–this time anyway. But he does know Thor is hiding something, Odin is up to something wicked, and there seems to be something he's forgotten …

In this tale that is equal parts “Another Fine Myth,” “American Gods,” and “Once Upon a Time,” a very nice midwestern girl and a jaded, very mischievous Loki must join forces to outwit Norse gods, elves, magic sniffing cats, and nosy neighbors. If Loki can remember exactly what he's forgotten and Amy can convince him not to be too distracted by Earthly gadgets, her breasts, or three day benders, they just might pull it off.

This first installment of “I Bring the Fire” is for anyone who suspects chaos, tricksters, and mischief makers might have their own redeeming qualities, and anyone who just wants an epic fantasy romp through contemporary Earth, ancient Asgard, and beyond!

Already have I Bring the Fire Part I? Monsters, Part II is available for only 99 cents for a limited time. Get it on Amazon or Barnes and Noble.

Brayden dreams for thirty nights, tortured by the vision of a beautiful woman. When Ariel Williams walks into his inn, he sees that she’s the one he’s been obsessed with in his night time journeys. But Ariel is fleeing an arranged marriage and keeps shyly to herself, until the worst happens and by mistake she casts a spell on a guest. Brayden works with Ariel to help her control her magic but discovers she’s a High Witch — one of only three witches in the world with a rare kind of power.

Immediately the two must flee; evil warlock Julius wants to enslave Ariel — mind, heart and body. Julius and his lover the High Witch Nadia will stop at nothing to capture Ariel, and the danger threatens to tear Ariel apart from Brayden. Ariel’s only hope is that her love for Brayden and her newly-discovered powers are strong enough to save them.

This is a NOVELLA of approximately 25,000 words.