WITCH HUNT (Preternatural Affairs) – SM Reine
Cesar Hawke wakes up with a dead waitress in his bathtub after a night of drunken partying, but he knows he didn't kill her. He works for the Office of Preternatural Affairs. He doesn't hurt people – he saves them. The cops disagree. Now he's running. He'll have to find Isobel Stonecrow, a witch that speaks to the dead, to clear his name and get his life back. He's bagged a dozen witches before. How hard can one more be?
___________________

CALLED (Southern Watch) – Robert J. Crane
A local cop keeping order in Midian, Tennessee, Archibald “Arch” Stan lives a good but ultimately empty life. Until the drifter with a sword comes to town. Lafayette Hendricks fights things that don't die – even when shot. As demons, chaos and unspeakable evils threaten Arch's small town, he and Hendricks must join forces to keep watch on the darkness before it swallows Midian–and from there, the world.
___________________

FLAMING DOVE – Daniel Arenson
A child of both angel and demon, Laila is outcast from Hell, banished from Heaven and lost on an Earth left in ruins. Yet the armies of Armageddon, ended now in an uneasy truce set to implode, both need her. She can become the ultimate spy…or ultimate soldier. As the armies of Heaven and Hell pursue her, Laila's forced to confront the struggle between her demonic and heavenly blood that battles within her heart.
___________________

CURSED! – Scott Nicholson & J.R. Rain
Albert Shipway is an ordinary SoCal guy, an insurance negotiator who likes booze and women and never having to say he’s sorry. But a little old woman knows about the storm of broken things — promises, hearts, families — littering his past, and she has one heck of a recipe for supernatural revenge: a psychotic ex, a pinch of childhood fear, a life-stealing great-granddad and a notorious mass murderer who doesn't know he's dead. Albert's about to get a chance to right some wrongs.

As a Vampire being hunted was nothing new. Finding out that I had to save those that were hunting us was!

Katrina, a young royal blooded vampire, chronicles her life from the age of seventeen beginning in the 1800's forward in the series Royal Blood Chronicles
.
Katrina is thrust into something she never could have imagined growing up in the aristocracy of Europe. Once the fashion of the day, and girlish gossip filled Katrina and her new friends days, but their lives changed the instant their race was threatened and they were chosen as the Five, and the protectors of not only the vampire race, but all the peaceful races of the world!

If you are looking for a new, exciting vampire series, with strong female characters you've found it in Royal Blood Chronicles. It starts here with Katrina, The Beginning!

A Dark Kiss of Rapture by Sylivia Day 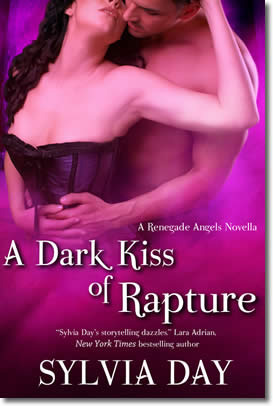 Of all the Fallen, Raze’s hungers are some of the darkest and most insatiable. His brazen seductions cost him his wings, leaving him soulless and immortal, the most dangerous of seducers. He has roamed the earth for eons, hunting the rogues of his kind and protecting the humans who provide him with blood and sex. He is content with his life and the transient pleasures that flow through it… until one night and one woman change everything.