Award-winning chef Phil Randazzo, and his anthropologist wife, Michelle, are as happy as any newlyweds with five kids and a ton of history. But something’s eerily amiss.

They’ve been married less than a year and already there’s someone else–at least it’s starting to seem that way.

First Hendrix the cat’s developed a new trick, but how does a flesh-and-blood feline walk through walls? Maybe with help from his best friend on The Other Side? Then there was that dude Phil saw upstairs Thanksgiving Day. Only nobody was there. But the odd thing was that “nobody” looked exactly like Michelle’s dead husband, Cajun musician A.P. Savoie. Her really really handsome and much-missed dead husband. Who died all too suddenly.

Can it be he wants her back?

Heart of the Hunter by Lara Adrian 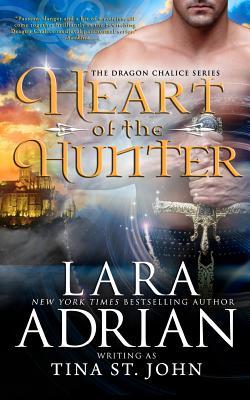 Ariana of Clairmont would risk anything to save her kidnapped brother, a quest she knows is fraught with peril. Her only ally is Braedon le Chasseur, a formidable knight with a mysterious past, whose scarred face and brooding nature mask a soul filled with pain. Ariana fears this dangerous man and the secrets he strives to conceal–but Braedon's touch is pure seduction, his kiss a potent lure that tempts her into a passion she is powerless to resist.

Once known as The Hunter, now haunted by a dark legacy he struggles to deny, Braedon lives in a world of shadow and isolation–until he is thrust together with an innocent beauty in need of his protection. Embarking on a journey that will lead them to a legendary treasure, Braedon will be forced to confront old enemies and the stunning secret of his true nature–or risk losing Ariana and the only happiness he has ever known. . . .

The Mating by Nicky Charles

Elise had no idea when she came home that day that she'd end up mated to a complete stranger. A new Alpha and the need for an alliance between packs have made her a pawn Excerpt: She lay beside him, staring blankly at the ceiling. The deed was done. They were mated. It didn't matter that she had no love for him nor he for her. Political alliances were more important than feelings…