Ava Keller sees the future. When she suffers a horrifying vision of a man's violent death, she knows from experience nothing she does will stop it from becoming a reality. But when she meets a strong, broken man, he makes her want to believe in second chances.

Tortured by his past, Karson has worked tirelessly to wreak vengeance on the demons who murdered his family. But when Ava inadvertently disrupts his intricate plan for revenge, his focus shifts to an all-consuming need to keep her alive and in his arms.

Thrown together by fate, Ava and Karson explore their new feelings and discover hope for the future. But they must battle the demons threatening humanity to find a destiny worthy of their love.

The Toil and Trouble Trilogy by V J Chambers 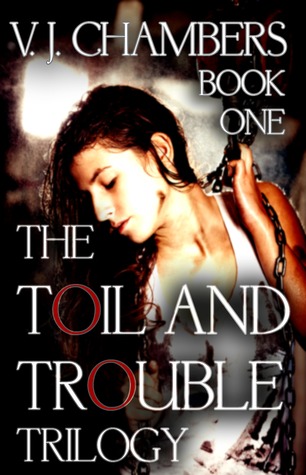 Eighteen-year-old Olivia Calabrese has valued nothing more strongly since her mob boss father was arrested and her mother was killed in the cross fire. Even though her family sells illegal magical charms that have the nasty side effect of turning some wearers into berserkers–rage-filled monsters–she sees betrayal as a far worse offense than harming people. To prove her loyalty, she dreams of succeeding her father as head of the mob family.

When her uncle, the current boss, is shot by a rival gang, she just might get her chance.

But her cousin, her only competition, whispers something to her that throws her off track. He says her mother ratted the family out to the police. He says that her mother's death wasn't an accident, but a hit ordered by her father.

Her entire worldview called into question, Olivia sets about hunting down the truth about her parents. And to complicate matters, she seems to be falling for a boy who's turning into a berserker–from her own family's charms.

As her set of values shatters around her, Olivia must choose between staying loyal to her family or fighting against them.

Blood and Snow 1-4 by Rachelle Workman

Every thousand years the vampire queen selects a new body, always the fairest in the land, and this time she's chosen Snow White.

Lips red as rubies, hair dark as night. Drink your true love's blood, become the Vampire, Snow White.”Praise for the Blood and Snow series: “The modern twist on the Snow White fairy tale was interesting and original, which isn't easy to find these days. Highly recommended.” Sarra Cannon, bestselling author of the Peachville High Demons seriesSummary:BLOOD AND SNOW: Snow White isn't an ordinary girl. She doesn't know that yet.
REVENANT IN TRAINING: Snow has become something not quite human. She must discover how to live with the changes, hopefully without killing anyone.
THE VAMPIRE CHRISTOPHER: Snow White craves blood. Especially the blood of her Hunter. But will drinking from him save or enslave her?
BLOOD SOAKED PROMISES: Snow White must come to terms with her bloodlust. It's one thing to drink the blood of her Hunter, something else entirely to drink the blood of a human.