Forged by Fate by Reese Monroe

He’s waited more than 900 years to love her.

Being the Gatekeeper to Hades is no small feat, and waiting almost a millennia to meet your mate is damn near impossible. But Theo Bradford’s mark has finally surfaced on his intended. Now all he has to do is find her and convince her to embrace her supernatural heritage.

Young genius, Sadie Nowland, has got life figured out. Graduating college at the age of eighteen and accepting a six-figure job is just what she needs to prove she’s made something of herself. But when a strange tattoo mysteriously appears on her shoulder and Theo starts talking about Mates, it catapults her neatly laid out life into chaos.

Targeted by a vicious demon escaped from Hades, Sadie is thrust into the volatile world of Shomrei warriors and a connection to Theo her brain can’t comprehend and her body can’t deny. That primal bond proves more imperative to their survival than either could have ever imagined—and just may be the key to the world’s survival.

Alexis Ames has a life full of promise…but not all promises can be kept.

When Alexis Ames is attacked by creatures that can’t be real, she decides it’s time she learns who she really is, with or without the help of her mother, who guards their family’s secrets closely. After meeting the inhumanly attractive, multi-talented Tristan Knight, however, Alexis retreats behind her façade of normalcy…until she discovers he’s not exactly normal either. Then their secrets begin to unravel.

Their union brings hope and promise to her family’s secret society, the Angels’ army, and to the future of mankind. But it also incites a dangerous pursuit by the enemy – Satan’s minions and Tristan’s creators. After all, Alexis and Tristan are a match made in Heaven and in Hell.

Every Last Kiss by Courtney Cole 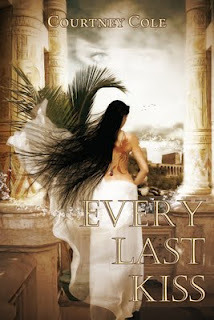 Born a goddess. Controlled by the Fates. Can Macy’s love for her soul mate survive the bonds of time… and death?

17-year old Macy Lockhart is as far from normal as any one girl can be. The problem is, she doesn’t know it yet.

After a bloodstone pendant is mysteriously left on her door, Macy’s life begins to change in ways she’d never dreamed. And while she will eventually come to realize that nothing is ever what it seems, that her life is a tangled web of lies and the Fates themselves pull the strings, for now she is left with only the explanations that they offer her.

Macy is led to believe that if she doesn’t return to a previous doomed life, one in which she served as Queen Cleopatra ‘s handmaiden, the fate of the entire world will be threatened in a way that would destroy history as we know it. She learns that she has lived thousands of lives, each one ending tragically…but none as tragic as this one.

After returning to ancient Egypt, she is faced with heart-wrenching decisions. Unless she interferes with Fate’s plan, the very thing she was born to protect, her soul mate will die leading Marc Antony’s forces against Rome. Can she really stand aside and watch the love of her life die all over again?

In this fascinating novel-length prequel to The Bloodstone Saga, Courtney Cole sets the stage for an epic journey that will have readers holding their breath until the very last page of the very last book has been turned.

What would you do if you held Fate in your hands?