Haunted By Her Dragon by Julia Mills $0.99

Life has never been easy for Dr. Samantha Malone especially since the day all those years ago that her family was taken in a tragic car accident. Now at almost twenty-nine years old and an aspiring surgeon, she is faced with putting her life back together once again after being kidnapped and left for dead. Had it not been for six feet two inches of walking muscle in ripped jeans and worn cowboy boots with crystal blue eyes and a cheeky grin that made her wonder what he was up to, she might never have seen the light of day. All these months later she knows he protects her from the shadows, never far but never seen. Why? What does he know that she does not?

There are no coincidences.

He protects her, always unseen but never far, making sure the ones that dared to hurt her do not come back while he waits for the time when he can claim her as his own. Fear is not something the fierce Dragon Guardsman is used to feeling but it is something he has become accustomed to over the last seven months. Fear that he will not catch the traitor and his cohorts before they hurt those he cares most deeply for. Fear that he will not be able to protect the one the Universe made especially for him. Fear that he is not what Samantha needs but then…

The Universe does not make mistakes.

Lance has spent his long life cracking jokes and making fun of his brethren as each succumbed to the sappiness of everlasting love with the one that completes them like no other. Now the Universe is the one laughing and his fellow Guardsmen are the ones making jokes as the mating call of his kin and his dragon push him headlong towards the one that will bring light to his soul in this life and the next. He can no longer deny that he is meant to spend the rest of his many years with Sam but his obligation to eliminate any threats to her life must come first…right? For the Guardsman who has hot-dogged his way through one hundred and twelve years, one brown-eyed curly-headed doctor will make him rethink everything he ever knew.

Fate will not be denied.

Bloodstorm, Heart of a Vampire book 1 by Amber Kallyn

When duty forces a shaman to stop a vampire from her revenge, love doesn't just burn… it bites.

For two hundred years, Niki DeVeraux has been tracking the monster who murdered her family and made her a vampire. She finally catches up to him only to face more than she bargained for in a too-sexy sheriff who makes her remember she's still a woman. With duties as Keeper of the peace and Sheriff, Shane Spencer must protect humanity and stop the friction between the local Arcaine races before it turns into an all out blood war.

When wolves start turning up dead, the tension between the races grows and suspicion falls on Niki. Shane knows she's not to blame, and it has nothing to do with the primal urges she stirs within him. Working together, they must stop the hostilities from going over the edge. Trouble is, the desires raging between them might prove more dangerous than the surrounding
threats.

Maggie For Hire by Kate Danley 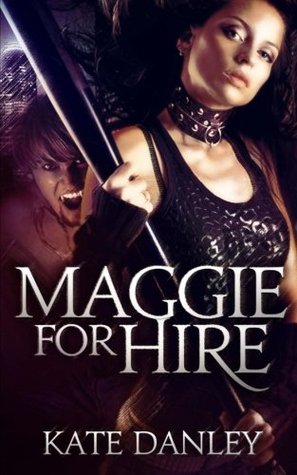 When monsters appear in Los Angeles, Maggie MacKay is on the job. No one is better at hauling the creepy crawlies back where they belong. No one, that is, except her dad, who disappeared without a trace in the middle of an assignment.

Now an elf named Killian has shown up with a gig. Seems Maggie's uncle is working with the forces of dark to turn Earth into a vampire convenience store, serving bottomless refills on humans.

The only hope for survival lies in tracking down two magical objects and a secret that vanished with Maggie's father.