Whisper Cape, Book 1 -Believing that her continual and worsening nightmares are both the key to her own new abilities and the clue to her father's death, Addie knows she will not rest until she has the answers she craves. As she strives to cope with her new remarkable talents, someone else learns of her abilities–a disgruntled maniacal psychopath with his own agenda that involves eliminating Addie. The only one who can protect her, instruct her in the use of her powers and teach her how to destroy the murderous monster is the same man who makes Addie's heart race and her blood heat with passion. The same man she'd left for dead.

Cael Sheridan may be arrogant and mysterious but he's also undeniably gorgeous. A member of a secret society, he is sworn to protect the woman he believes to be the daughter of his recently murdered mentor. In the process, he finds it impossible to resist her magnetic sensuality, complicating his efforts to shield and guide her as she learns to manage her newly acquired skills. At the same time, Addison has much to teach him about trust and commitment. Will fate win in the end? You be the judge.

Reflections, Book 2 – What if you heard a voice whispering warnings while you coped with a frightening pregnancy?
Knowing the future has its advantages…or does it?
Can love survive the reflections and memories lost?
Welcome to Maia's world.
Gerry has loved Maia from the very first moment he laid eyes on her and now that she's pregnant with his child, he's over the moon with happiness. Likewise, Maia is overjoyed about having Gerry's baby, but when she starts seeing and hearing an old woman who warns Maia about the pregnancy, Maia starts to think she is losing her mind. But Maia's nightmare has only just begun…

A beautiful woman, the talented lead singer in an up and coming rock band, sets her sights on Gerry determined to rekindle an old flame. But murder befalls the sleepy town of Whisper Cape once again, creating suspicion and betrayal, and a love once considered invincible, begins to crumble and fall apart.

Cael and Addison’s fate has taken an unexpected turn.

Gerry, Addie and Cael almost captured Careen’s murderer only to lose Cael in the battle—a battle that nearly cost him his life. But despite his survival, he faces a new challenge, thanks to Gerry's handiwork: will Cael remember Addie or is their love lost with him?

Addie’s family and friends think she should keep the relationship a secret from Cael so he isn't forced into feelings he can't remember. Just what she needs, more secrets and on top of everything else, someone stole the crystal. How is she supposed to get over the loss of her lover, a lover she'd barely had for only a few short months and deal with the secret of the lost crystal at the same time?

Aiden wants nothing more than to help Addie overcome her grief and get over Cael. Or is that all he wants? What happens when too many people know the secret and someone slips up?

Vampires are people, too.

Cameron's Law has made all supernatural creatures legal citizens, and the boy next door has suddenly become the werewolf next door. With Sadie Stanton, vampire and one of the public faces of the legislation, calling the little town of Adelheid, Connecticut home, it can't help but be a focal point for these once mythical beings.

But when vampires start attacking werewolves without provocation, Adelheid draws the attention of those that would seek to have Cameron's Law repealed and would send the preternaturals back into the shadows they used to hide in, but without the safety of their anonymity and their law.

Can Sadie keep the city's two biggest species from descending into chaos and war before it brings all of them to harm? And can she do it when she herself gets thrust into the spotlight? 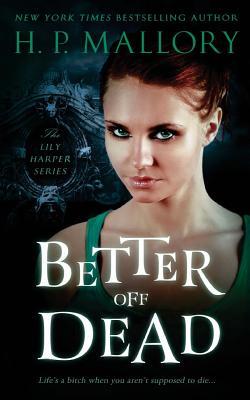 BETTER OFF DEAD is the first book in the Lily Harper urban fantasy series:

If there’s such a thing as luck, Lily Harper definitely doesn’t have it.

Killed in a car accident before it’s her time to go, Lily learns that the hereafter isn’t exactly what she hoped it might be.

First, there’s AfterLife Enterprises, the company responsible for sorting out the recently dead and sending them on their way to the Kingdom, (aka happily ever after,) or to the Underground City, (not so happily ever after.)

Learning that Lily’s death was indirectly their fault (her guardian angel, Bill, was MIA during her accident and was one of their employees,) Afterlife Enterprises offers Lily the chance to live again.

But, as with most things involving the afterlife, beware the fine print. Most notably, Lily will become a soul retriever, venturing into the bowels of the Underground City to retrieve souls that were mistakenly sent there by Afterlife Enterprises during a Y2K computer glitch.

Second, there’s angel Bill. As if risking her second life in the Underground City wasn’t enough, Lily’s guide to the Underground is none other than her incompetent, alcoholic, womanizing guardian angel, Bill, the antithesis of anything wholesome. With only Dante’s Inferno and Bill to help her in her quest, Lily’s future isn’t looking bright.

Finally, there’s the legendary bladesmith, Tallis Black. As Scottish as his kilts and heavy brogue, Tallis Black is a centuries-old Celt who, for reasons only known to him, offers to train Lily and act as her escort into the depths of the Underground City. Dark, brooding and definitely dangerous, Lily knows she shouldn’t trust Tallis, but she also can’t deny her attraction to him.

Between soul retrieving in hell, dealing with Bill and trying to figure out what’s in it for Tallis, Lily wonders if maybe she would’ve just been better off dead.