Losing a loved one is never easy. Deliah learned to live without her parents when fate took them from her as a young girl. But history repeats itself and causes her to face even greater challenges when Tess, the woman who raised her and was like a second mother to her, passes away. Even worse than dealing with her loss is the coinciding arrival of inexplicable nightmares that haunt Deliah’s nights.

She becomes consumed with images she doesn’t understand and a recurrent dream about her parents’ car accident. Oddly, this dream details different versions from what she had always been told about the accident.

But when a new family, The Wates, arrive in town and begin to pay close attention to her, even stranger events follow. Now, Deliah must not only face her nightmares, but the possibility that a world she never suspected exists. And this world may cost her everything.

Heiress of Lies by Cege Smith

Blood never lies, but people do…

With the King of Altera on his deathbed, all eyes are on his only child, eighteen-year-old
Angeline Robart. Called from her studies to return to her father's side, the Crown Princess is kidnapped en route by Connor, a mysterious rogue who has been waiting a long time for the chance to change his destiny.

Facing the consequences of a freak accident that even Connor could not prevent, Angeline is forced to travel a dangerous path to regain control of her fate and her kingdom. Her impossible choice requires her to rely on Connor, who epitomizes everything generations of her family tried to destroy.

As the last of the Robart bloodline, Angeline discovers that enemies she thought long conquered have been lying in wait for just such an opportunity as her father's death to turn events to their advantage. Worse yet, by uncovering those secrets, Angeline must confront the possibility that no one ever expected her to take the throne in anything but title alone.

As her bond with Connor grows stronger, she realizes they have far more in common than she ever expected, and that could make him just the ally she needs.

The Medium by C J Archer 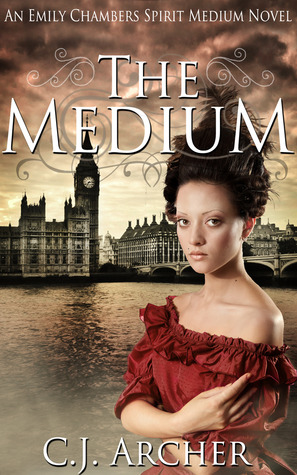 Seventeen year-old spirit medium Emily Chambers has a problem. Actually, she has several. As if seeing dead people isn't a big enough social disadvantage, she also has to contend with an escaped demon and a handsome ghost with a secret past. And then there's the question of her parentage. Being born an entire year after her father's death (yes, a year) and without the pale skin of other respectable English ladies, Emily is as much a mystery as the dead boy assigned to her.

Jacob Beaufort's spirit has been unable to crossover since his death. It might have something to do with the fact he was murdered. Or it might not. All he knows is, he has been assigned by the Otherworld's administrators to a girl named Emily. A girl who can see and touch him. A girl who released a shape-shifting demon into the mortal realm. Together they must send the demon back before it wreaks havoc on London. It should be a simple assignment, but they soon learn there's nothing simple when a live girl and a dead boy fall in love.