In a shadowy industrial building in downtown Chicago, a shifter revolution is being plotted.

Chogan Pallaton, wolf-shifter and self-appointed leader of the uprising, doesn’t want to admit to himself that he and his cousin might be in love with the same girl. He needs to stay sharp, fierce, ruthless, and his feelings for Autumn are muddying his focus…

Autumn is a scientist, a woman who has lived her life based on facts. But her discovery of the existence of shifters, together with the possibility that her blood holds the key to their creation, has left her reeling. Though once safe in Blake Wolfcollar’s arms, a dangerous situation and unveiled secrets leaves her wondering if she can truly depend on him.

With the government seeming to ignore riots and protests downtown, and as attacks on the shifters grow in frequency, Chogan and Autumn need to discover who they can trust and who will betray them…

And when trust is broken, can it ever be mended?

The Ghost and The Graveyard by Genevieve Jack

Life is full of difficult decisions!

Book 1 of 4 in the Knight Games Series

Grateful Knight isn’t looking for love when she moves into a rent-free house on the edge of a graveyard. At twenty-two, all she wants is to recover financially so she can move back to the city where she belongs.

But sparks fly when the gorgeous cemetery caretaker, Rick, introduces himself and mentions his suspicion that her new house might be haunted. Her attraction to him seems supernatural, and despite her resolve to not get involved, she literally can’t keep her hands off him.

When things in Grateful’s house start moving on their own, another man enters her life, Logan, a sexy ghost with a dark secret. He says Rick isn’t what he seems, and indulging her passion for him could cost her soul.

One thing’s for sure, magical forces are at work in the tiny town of Red Grove, and they’re converging on Grateful. Life will never be the same once she's forced to choose between the ghost and the graveyard.

Don't miss the other books in The Knight Games Series

˃˃˃ **Due to explicit sexual content, language, and violence this book is recommended for ages 18+** 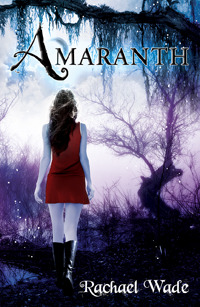 Knowledge changes everything…Hoodoo-influenced Southern Louisiana seems like the perfect place for Camille to relocate and escape her abusive past. She didn't expect to fall in love and plummet herself into the world of Amaranth, a place of exile for reformed vampires.Thanks to her deadly vampire ex-boyfriend, she's confronted with decisions that not only threaten her life but the lives of her inhuman friends that she has come to love. Entangled in her friends' quest for freedom, she dives into their realm and faces the threats of the ruler of Amaranth–the mother of all vampires–and her own inner demons.Will she derail her life and make the ultimate sacrifice for the very monsters that interrupted her bumpy path back to sanity–the one she wanted so desperately in the first place? Or will she find a way to escape with her vampire love before it's too late?