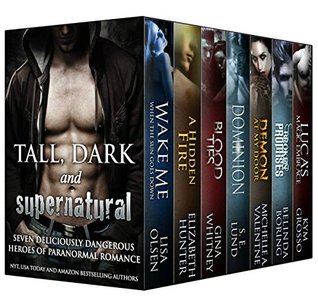 Seven novels from some of the hottest names in Paranormal Romance on sale for only 99 cents! New York Times, USA Today and Amazon Bestselling authors take you on a walk on the wicked side with seven deliciously dangerous heroes sure to set your soul on fire.

Wake Me When the Sun Goes Down (Forged Bloodlines, Book 1) by Lisa Olsen

When Anja Evans wakes up in the morgue, it takes almost eating her best friend before she figures out she’s a vampire. Anja tries to blend school with her new identity, while searching to find the Viking whose blood gave her the strength of a vampire hundreds of years old. But breeding among vampires is strictly controlled, and her unlicensed status makes her an enemy of The Order.

No secret stays hidden forever. Giovanni Vecchio is a 500-year old rare book dealer searching for a lost treasure. Beatrice DeNovo is the young human holding secrets she didn't realize could be the key. Their partnership is unexpected. Their attraction? Impossible.

Grace is half witch, and half mortal. James is a powerful warlock. The two share a fierce supernatural attraction that neither can resist. Will their undying love protect her or put her in greater danger?

When searching for the vampire who killed her mother, Eve Hayden meets 800-year old identical twin vampire brothers – beautiful, temperamental opposites, who both want her for themselves. Will she be forced to choose between love and revenge?

Demon at my Door by Michelle A. Valentine

A woman must fight to win her soul back from the demon that she promised it to when she was only a child to save her mother’s life.

All Bri wanted was spend her Friday night with the man she loved. Little did she know leaving her home would result in her relationship with Quinn being tested beyond its limits. With the city around her crumbling under a violent charm by invading Fae, Bri must trust her heart as Quinn succumbs to the destructive magic, stripping him of his goodness and leaving a much darker man in its place.

What would you do if the man you loved became one of your greatest enemies? Would your love be enough to save him?

Can this witch survive in a world of magic, possibilities, danger, and love?

Ebony Bell owns a cantankerous magical bookstore with a personality like a battering ram. Her best friend is a detective who drives like a bat out of hell. And a tall, dark, handsome, but seriously irritating stranger by the name of Nathan Wall has just walked into her life.

Oh, and she's a witch. A consultant witch, to be precise. She spends her mornings selling books and her evenings investigating magical crimes for the local police department.

While her life is messy, she manages, until one investigation ends in a costly mistake. She reveals her powers to a normal human, and in punishment is severed from her magic for one lunar cycle. If that was her only problem, she would cope, but very soon darkness surrounds her.

Something is after Ebony Bell. A curse. She must fight it, or die. And if that wasn't bad enough, she has to rely on the help, and kisses, of that darn Nathan Wall.

The Mating Chase by Bonnie Vanak 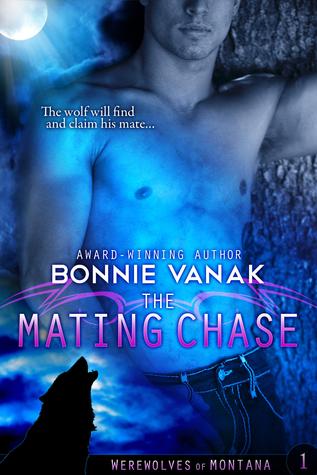 Welcome to the sensual world of the Lupine, where the burning drive to mate claims all…Home from college, where men teased her for being overweight, Beth doesn't fit into pack life at the Mitchell ranch. Because she's forgotten how to shift into a wolf, the pack alpha has ordered her to choose a mate or leave. The only male Beth desires is Dale, a fiercely protective Lupine who loathes the human lifestyle she embraces. She hungers for the handsome shifter's touch, but fears their differences are too vast to overcome.Dale has waited for four long years for Beth's return. Her scent ignites his desire and her voluptuous body fires his blood. He is determined to awaken her to the sensual world of the Lupine. Although she acts more “Skin” than wolf, he can't deny his overwhelming drive to claim her.As the heat of passion threatens to consume them both, a new peril arises. Someone is killing a local rancher's livestock and blaming it on wolves, endangering the pack's ability to shapeshift. It will take all Beth's courage and Dale's skill to find the enemy threatening to destroy their world…