For over a thousand years, Deacon has led his vampire brethren to live in peace amongst humans. But that was before he entered the dreams of the beautiful Rose, hungering desperately for that which he could not claim because the very laws he had set forbade it. Laws that meant certain death for the Hydden should they be broken…laws that Deacon himself might just shatter for a tiny little human.

Skirting the razor's edge of lunacy because he hungered for her blood, can he ever possess the unattainable while still protecting himself from someone close by who seeks to destroy him? Or will Rose mourn the promise of an eternal forever if Deacon brings about his own death? 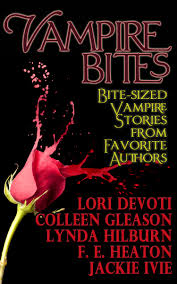 Ready for a nibble? Read on!

Lost by Lori Devoti (First in Lost Series)
After a car crash that may have taken her friends’ lives, Rachel Daniels finds herself lost on a cursed mountain. Her only hope to escape the place and save her friends is the man she finds wandering through the night; except Cameron Renault is no ordinary man. He’s a vampire and Rachel’s nightmare may have just begun.

Victoria Gardella: Vampire Slayer by Colleen Gleason (A Gardella Vampire Chronicles story)
1820: Victoria Gardella tries to enjoy a ball with her new beau, Lord Rockley–but when bloodthirsty vampires come upon the scene, she must leave the fun in order to employ her stake alongside the grim Max Pesaro (vampire slayer) and the mysterious Sebastian Vioget.

Reunion by F E Heaton (A Vampire Realm Series Story)
For Venia vampire Marise, returning home isn't something she wants to do, but duty dictates that she must investigate the attempt on her Lord's life by another vampire. Faced with her old home, she tries hard to suppress the memories of happier times with her ex-lover Jascha and the darker ones that led to her leaving, but it becomes impossible when she discovers he was injured in the attack. Is fifty years enough to forgive the one you love for breaking your heart? And can Jascha convince Marise to listen to what he has to say and make her love him again?

Until Death Do Us Part by Lynda Hilburn (Kismet Knight, Vampire Psychologist series)
Denver Psychologist Kismet Knight counsels vampires. Meeting with this couple reminds her that vampires aren't merely humans with fangs, and some bloodsuckers are harder to counsel than others.

The Spell by Heather Killough Walden 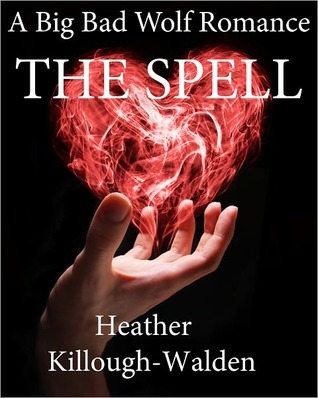 Dannai, who is also known as the Healer, has begun dreaming of werewolves. She'd always been able to hide the fact that she was a dormant, using her magic to shield the sweet, promising scent from the alphas she's been forced to work around. But now that they've invaded her dreams, her world has really been turned upside down. For, though every dormant dreams of her intended mate – Dannai is dreaming of two wolves, not one. And neither one of them is good news. One is a notorious killer. The other is Lucas Caige.

Lucas Caige is a man with a haunting past. A warlock took his brother from him fifty years ago and he's spent his life outrunning that dark magic. But fate has a way of throwing sand in your gears – and just when Caige thought he could forever leave behind the magic that brought pain to his life, his path crosses that of the Healer. Dannai unwittingly casts her spell over him the moment he lays eyes on her. She's stunning, she's kind, and everything about her wreaks havoc on his senses.

But if Dannai thinks that's going to stop him from doing everything in his power to make her his mate, the little witch has another thing coming.