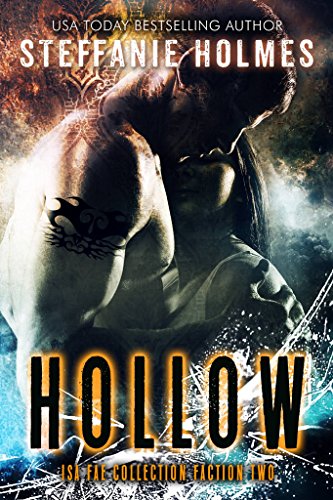 This is no ordinary haunted house.

On the eve of the greatest battle between the witches and the fae, a powerful witch transferred all of her magic into her house. Called the Hollow, the house sits on the outer edges of the fae realm, slowly being torn apart by the clashing forces of the fae realm and the ruined human world.

The Hollow isn't any ordinary house. The rooms change places, the walls are closing in, and every day the house gets closer to being crushed beneath the weight of the void between worlds.

Aisling is the Hollow's last protector, a young woman ready to sacrifice herself to protect her family’s magic from falling into the hands of the fae. She knew the Hollow would eventually take her life. But she never imagined it would bring her the boy of her dreams.

Niall is a warrior, a fae born and bred for killing. But all his strength and guile can’t help him save his brother, who is being held prisoner by a rival fae. The only way Niall can free his brother is to gain enough magic to pay off his debt. And there’s only one ready source of residual magic in the city – the Hollow.

Now, Aisling and Niall are trapped inside the Hollow. As their enemies batter at the doors, desperate for entry, and the void between worlds threatens to consume them in eternal night, Aisling and Niall must battle their own demons and join forces to save the magic of the Hollow from falling into the wrong hands.

If the Hollow falls, both worlds fall with it. But if Aisling and Niall succeed, they will be forced apart for all of eternity.

Hollow is a standalone paranormal romance novel by USA Today bestselling author Steffanie Holmes, and Book II in the Fallen Sorcery shared world series. If you like stories of clever witches, deadly fae, and a house with a mind of his own, this book will be impossible to put down.

Hero to Zero?
John Luke Legacy thought his life was moving along right on track. He was in line for a promotion, his love life wasn't bad and he had a great relationship with his son. Then he learned the truth about his family and everything changed. He did what he thought was right and hoped he wasn't making a huge mistake.

Ex is an ugly word.
Not only is he an ex-husband, now he's an ex-agent with the FBI. And when he tells his girlfriend that he quit the Bureau, he's also an ex-boyfriend. He has little choice. There's nowhere to go but home. That’s depressing, but at least he will be closer to his son.

Illiana.
She’s as exotic as her name. All woman and all warrior. Illiana is no shy flower. She’s a handful. Actually more. Big, strong and fearless, she inspires desire that surpasses anything he’s ever felt. But it’s more than passion. Illiana inspires emotions he didn’t think himself capable of.

But things are not what they seem.
John Luke discovers that his view of the world up until now has been surprisingly naïve. There are things going on that make fantasy tales seem tame. And there are people that make him understand just how those fairy tales began. Like Illiana.

Lust and love walk hand-in-hand
She’s going to teach him about a level of passion he didn’t know he possessed and a depth of love he didn’t dream he was capable of. He sees a future he wants more than anything.

Now all he has to do is keep her alive to claim it and it won’t be easy because those who want her dead will stop at nothing and their numbers are many.

But they’d never done battle with a Legacy

To fight your fate will end in fire or fortune.

Abigail Leigh always believed herself to be boring, average, and dull. However, Caleb, her lifelong crush, couldn't be any of those things—not with his luminescent white irises, heart-melting smile, and elusiveness.

But a missed prom date, stalkers, and strange happenings lead to the truth—Abigail is anything but normal. A child of the Eclipse, bound to protect the world from the creatures once believed to be mythical, she is thrust into a world she didn't know existed.

Zolnerowich, the vampire clan leader, is determined to bring darkness to all, and Abigail and Caleb must stop him. Traitors among them, teammates lost, the stakes ever growing . . . Abigail must risk losing her soul mate to right the wrongs she unknowingly helped create and to restore peace to the world of magic.

Everything you thought you knew about mermaids is wrong.

Life for a small-town high school kid in Saltford should be simple and straightforward – for 17-year-old Targa MacAuley, it’s anything but. Navigating life with a supernatural mother is tricky enough, but dealing with the feelings of guilt that she’s never been able to ‘change’, and confusion that she doesn’t seem to be attracted to boys (or girls for that matter), Targa feels like she’s got more demons than the average kid.

When the opportunity to salvage a mysterious wreck in the Baltic arises for her mom, a professional salvage diver by day, Targa jumps at the chance to go abroad for the summer. But it’s when she meets Antoni Baranek, and a boating accident puts them both in danger, that Targa’s world turns completely inside out in more ways than one.