About the Midnight Breed series….

Prepare for seduction as Lara Adrian unleashes a dark new breed of vampire . . .

Part human, part otherworldly, the Breed has lived among humankind for thousands of years, maintaining a tentative peace built on secrecy, power, and the dark justice carried out by the formidable warriors of the Order.

But now, a blood war within the race is set to ignite. Vampires are going Rogue in startling numbers, feeding without discretion, killing humans in the streets. It is up to the Order to stop the spreading threat of Rogue domination–and in so doing, each of the warriors will be forced to confront private demons, darkest secrets, deepest fears. Some will know triumph, some will know loss, but each warrior can count on one thing: Love, when it finds him, will often come at the worst possible moment, with the least likely woman . . . and it will bring each of these powerful males to his knees. 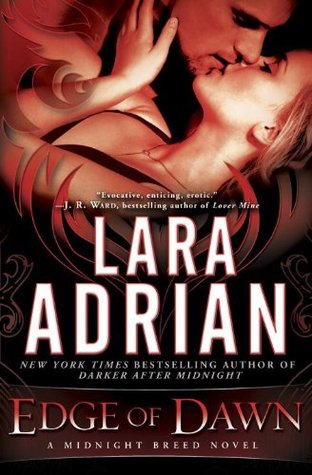 Twenty years after First Dawn – the morning that followed a blood-soaked night where Mankind learned that vampires lived among them – wars and skirmishes continue. Peace between humans and the Breed seems elusive, but the Order and their allies will not rest until it is won. For Mira, raised with the Order from the time she was a child and now the formidable captain of her own team of warriors, the fight is personal. War with mankind has cost her a great deal – the life of someone she loved dearly.

Vowed to avenge his death, Mira blazes into every battle like a Valkyrie – until an unexpected encounter with a rebel leader brings her face-to-face with a startling truth, and a betrayal that will cut through her every defence… straight to the core of the wounded woman whose faith has never been more tested, nor her heart more deeply torn.

Click here to view Edge of Dawn on Amazon >>

Click here to view Edge of Dawn on B&N >>

Have you got this book yet?  Started reading it yet?  Let us know what you think!!