Inner Sanctum: Rock Bands and an Ancient Prophecy with The Rise of the New Bloods

K A Hambley is the author of The Rise of The New Bloods series.  The first book in the series is From Dark Beginnings and K A has just released the second book, Darkness Rising.

The Rise of the New Bloods, Darkness Rising

Sequel to The Rise of the New Bloods, From Dark Beginnings

Eleven months later, and Jyrki is back again. In Wales. What has the ancient prophecy got planned for him now?

Having left New York to embark on a UK tour with the Black Stones, Jyrki set sails across the Atlantic to London, but things don't go according to plan – well they won't when you're still a vampire.

As Jyrki and Blaze begin to start their music career they meet a mysterious cab driver called Dave who takes them to Wales to meet with Ryder, and it doesn't take Jyrki long to turn into a bad vampire either.

Upon meeting with a guy, simply called Vlad, Jyrki soon learns that the prophecy has another plan for him. He now has to tackle the Underworld that is escaping from the veil that was left open last Halloween at Central Park.

But there is a darkness rising that might just jeopardise his efforts to become human.

From Dark Beginnings is the first book in The Rise of the New Bloods series. 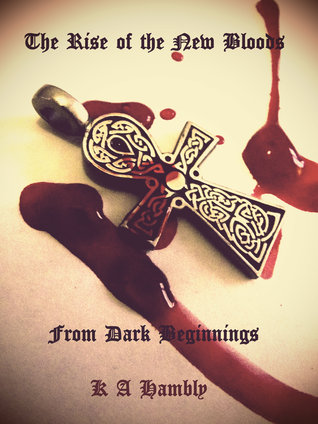 Humans believe vampires are a myth, but unbeknown to them there are vampires masquerading as humans.

For two hundred years, the last clan of vampires have lived in Scandinavia protecting the only thing which shields them from the sun, an ancient Egyptian relic called the ankh.

Jyrki, the youngest member of the New Bloods clan has been chosen by an ancient prophet to protect the ankh from the human race, but after discovering his family have been murdered it propels him to venture into the world where he is forced to learn and control what he is to conceal his identity.

Click here to view From Dark Beginnings on Amazon.com >>

Click here to view From Dark Beginnings on Amazon.co.uk >>

Firstly K A, tell us about your book/series.

The Rise of the New Bloods is a modern vampire tale set majorly in Finland and New York, but we see some of London and Egypt as we delve further into the series. It centres on a young vampire called Jyrki who has been dealt a terrible fate. He has to return the Ankh, (which keeps him safe from the sun) back to Egypt where he will eventually become mortal. Of course, there are many obstacles in his way, and his immortal life is not an easy one. Darkness Rising, which is my second novel and the second part of the New Bloods, has just been released.

What are you working on at the moment?

I’m working on a short story called Lumi, which will accompany the first and second novels in the New Bloods series.

What inspired you to become a writer?

I’ve always been writing. I used to write reviews for the local paper and quite liked the idea of becoming a journalist at one point. When I was younger, I published and wrote a Manic Street Preachers fanzine. We only had one issue but it well received by Patrick Jones, who is Nicky Wire’s brother. Other than that, I never had plans on becoming an author but like most people, I’ve always quite liked the idea of writing a novel. I was the kind that would start something but soon gave it up. It wasn’t until I had the idea for the New Bloods that I was determined to get Jyrki’s story down. Even then, I had no idea about self-publishing nor did I think I was going to publish it. I was just addicted to the story and felt I needed to write this.

How long have you been writing?

As an author, two and half years.

What is your relationship with your characters? Do you have a favorite? Is there one that you find a bit more difficult?

Jyrki is easy to write but my favourite would have to be Stride and my new character called Vlad in the second novel.

Is there anything that you find challenging about being a writer?

Trying to please everyone. Even though it can’t be done. You will get good reviews and some bad, but it’s always the bad that you remember most but it is those reviews, which make you even more determined to carry on doing what you’re doing.

Do you have a strict writing routine/word count per day?

No. I don’t force myself to write a certain amount of words a day. As long as I have something written that’s fine by me. But I do try to write every day.

I think it’s to do with the fear of death and the unknown. I suppose everyone would like to cheat death and live forever and vampires offer that solution.

Are you also an avid reader? What are you reading at the moment?

I’m reading Stephen King’s The Dark Tower and I’m half-way through Lord of The Rings.

Doctor Who has just arrived in his Tardis. He puts you charge of the time machine, what would you do?

I’d go back to 1940’s Britain. Or to the beginning of the universe.

You are planning an awesome dinner party. Which 3 celebrities/fictional characters/historical figures (past or present) would you add to your guest list?

Do you have any advice for aspiring writers?

K A Hambly lives in Swansea, South Wales. She studied English and Media, where she wrote a thesis on Dracula (From Novel to Cinema)
Vampires and Gothic Horror have always been an interest of hers so it is no surprise that she began writing her own vampire series in 2011. She states music and movies play a huge part in her inspiration.