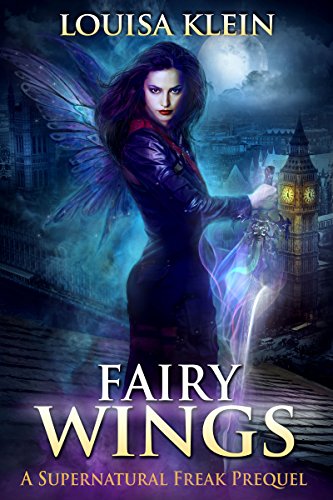 SHE WAS WARNED. SHE WAS GIVEN AN EXPLANATION. NEVERTHELESS, SHE PERSISTED.

Twenty-two year old paranormal consultant Robyn Wise may be a supernatural freak, but she’s not stupid. So, when a handsome billionaire hires her to help him find his kidnapped girlfriend, who also happens to be a fairy, she immediately knows that something VERY serious is happening in London. And not only because fairies are the most secluded supernatural folks on Earth and they’re not supposed to interact with regular people, let alone dating them! So, what on Earth was she doing in town?

Plus, facing alone whatever creature is so powerful to imprison a fairy is a one-way ticket to sleeping with the fishes. Yep, she can see ghosts and is even best friend with one, yes, she can sometimes perform fairy magic and has an inexplicable supernatural agility, still … she needs help. And who can help her better than maverick wizard James Turner? He’s powerful, smart, funny and experienced. He’s also annoyingly charming, but no one’s perfect, after all …

NOTE: THIS IS A PREQUEL TO MY MAIN SERIES SUPERNATURAL FREAK AND THE FIRST ADVENTURE OF ROBYN AND JAMES, THE TWO MAIN CHARACTERS. IT CAN BE READ AS A STANDALONE, THOUGH, YOU DON’T NEED TO HAVE READ THE MAIN BOOKS TO ENJOY IT. Hope you have fun!

They're powerless without her; she's powerless to resist.

The list of reasons why Lexus Wren is the last girl any guy would be interested in is mercilessly long:
Her dad’s in prison for murder, her mom drowns her sorrows every night at Dave’s Dive, and Lexus is just trying to survive the cruelties of high school as a painfully shy bookworm with a bad wardrobe and a collection of nervous habits. Never in a million years did Lexus expect to attract the attention of two hunky transfer students, Phoenix and Griffin Easton.

The troubled brothers are haunted by their own demons and don’t seem bothered by Lexus’ tarnished reputation; they’re too busy vying for her attention and trying to figure out why being around her makes them feel like electricity is frying their insides. When Lexus’ family problems reach a critical tipping point, the boys are drawn to protect her, and the truth about who they are is revealed in an explosive confrontation that will astound them all.

Mia is just a college girl trying to earn her degree—being a shifter is something she hides, hoping her secret won’t sabotage her dreams. Shifters live in the shadows, dangerous and criminal. At least, that’s what she thinks until a wolf saves her from an attack in an alleyway… and then turns up as the hot boss at her new dot-com internship.