The Elkridge Series is a puzzle. In book 1, BLINDED, Sheriff Sam is murdered. Clues are dropped in each stand-alone love story. Solving the crime will not be easy. In book 6, Rescued, all is revealed. If readers like sensual romances, with deep emotional topics, threads of suspense, and a happy-ever-after then BLINDED, a stand-alone love story in the Elkridge Series, is for you. Let the mystery begin.

A small town murder. A second chance at love.

Somebody killed Joey Gaccione’s brother. After a 10-year absence, the big city detective returns home to Colorado for the funeral, knowing he will be pressured to find Sheriff Sam’s killer. Joey’s instincts say whoever murdered his brother is part of something more sinister than the Elkridge deputies can handle.
Mara Dijocomo’s dreams died the night a drunk driver killed her parents and sister, and left her permanently wounded. After months of therapy, she’s finally adjusting to her new reality while working to save her mother’s floral business. When the first boy she ever loved walks back into her life, she wonders if she and Joey are getting a second chance at love.

As Joey and Mara’s love blossoms, the evidence becomes clear the local deputies are either ill-equipped to comprehend what’s happening, or someone’s covering up a crime. Joey and Mara fight to balance between their careers, family, and their renewed love until the FBI contacts Joey. That call ultimately tips the scales.
If you like a steamy romance, deep emotional topics, a thread of mystery, and a cozy happy ending then BLINDED is for you. The first book in the ELKRIDGE SERIES debuts a quirky cast of characters and begins introducing evidence to solve Sheriff Sam’s murder.

PAST CHOICES DO NOT DETERMINE THE FUTURE…A broken heart. A yearning soul. A choice to make.

A SALON OWNER WHO’S FORGOTTEN HER DREAMS…Kym Zhang feels stuck. Her parents abruptly moved, leaving her to balance running a nail salon and helping her best friend heal after a near-fatal car accident. The day-to-day grind is getting tedious until a mechanic sparks her interest.

A MECHANIC WHO’S STUCK IN THE PAST…Zach Cohen’s been all over the world building cars for movie stunt scenes. When his mentor asks for help, the Hollywood film mechanic can’t refuse. Besides, he needs a quiet place to rest, and time to get over the woman who demolished his heart.

When the cute salon owner asks him to jump her—actually her car—he figures Kym to be the perfect solution to defuse the volatile situation with his ex. However, he underestimates Kym, and how much she can make him forget old hurts in favor of new love. A slow sizzle burns between Zach and Kym until Hollywood calls him back, forcing them to make choices between their obligations and what they truly want out of life.

SPURNED is a steamy romance novella (23K words, 85+ pages) featuring a wounded woman and a man who fulfills a dream. If you like heartfelt characters, deep topics with emotionally powerful cores, and happy endings, then you’ll crave Lyz Kelley’s tales of strength, love, and survival.

LIFE DOESN’T EVER GO AS PLANNED, BUT CAN BE BETTER THAN IMAGINED.
Her mother’s death. His PTSD. A combustible relationship.

A CAREGIVER WHO NEEDS TO MAKE A PLAN, AND FAST…Ashley Bryant has less than five weeks to organize, sell, and pack away her old life before she’s uprooted and forced into a completely new one. She needs to make several critical decisions, and with her life upended and spiraling out of control, the last thing Ashley needs is a sexy U.S. Marine complicating matters.

A MARINE WHO HAD A PLAN BUT HAS LOST HIS WAY…Gunnery Sergeant Chase Daniels has just buried his best friend, and his commanding officer has given him a month to commit to either retiring or returning to active duty. Struggling with PTSD, fatigue, and grief, he stumbles into Elkridge, a quiet Colorado mountain town, to figure out his future.

With their lives in upheaval, Ashley and Chase have a lot in common, but the last thing each needs are more complications—like their instant attraction to each other.

The ELKRIDGE SERIES is a set of steamy contemporary romance novels about wounded women and the men who heal them. If you like heartfelt characters, deep topics with powerful emotional cores, and happy endings, then you’ll love Lyz Kelley’s incredible tales of strength, love, and survival.

The third, full-length novel in the series, ABANDONED continues to give you a peek into the day-to-day lives of the town characters and drops clues about Sheriff Sam’s murder. 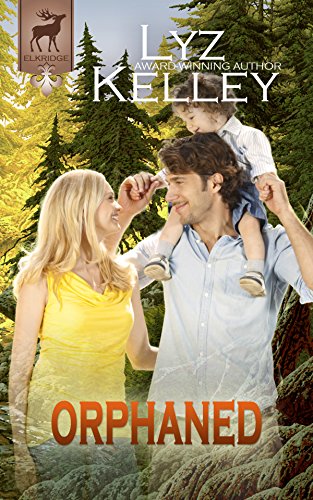 The search for a sister. Decades of guilt. Who to trust?

Jenna is desperate to find her younger sister, who was taken from her when she was seven years old. She believed Caitlyn, who was adopted by a wealthy family, was doing fine, only to discover her sibling vanished under eerie circumstances. Unfortunately, Jenna’s attracted the attention of the last man to see her sister alive.

Grant has returned to town to take over his ailing father’s law practice. When his socialite parents try to interfere in his relationship with Jenna, a woman they consider lower class, he puts his foot down. He intends to marry the adorable baker, and no one will change his mind—not even Jenna.

Jenna and Grant’s lives are upended when a stranger brings upheaval, and their trust in each other is severely tested by this shocking surprise.

The ELKRIDGE SERIES—sensual, contemporary romance novels about wounded women and the men who heal them. If you love heartfelt characters, deep topics with powerful emotional stakes, and happy endings, then you’ll love Lyz Kelley’s moving tales of strength, love, and survival.

In ORPHANED, the fourth full-length novel in the series, you learn more about town characters and unearth more clues to who murdered Sheriff Sam.
A woman in hiding. A past to resolve. A Marine to the rescue.

A woman in hiding. A past to resolve. A Marine to the rescue.

When a broken water pipe destroys Gwen Keebler’s thrift store, she’s convinced her day can’t get worse. But that same day, her blackmailing ex-fiancé finds her living in the small Colorado town of Elkridge. She’s ready to pack up and hit the road again when a former Marine provides options.

Retired Brigadier General Dale Bryant has returned home to repair his relationship with his daughter, and his broken, widowed heart. The last thing he expects is to rescue Gwen as well. The sexy storeowner caught his attention the first time they met, but he’s fourteen years older, and she’s his daughter’s friend.

Yet to truly save Gwen, the widower realizes he must let her go. Will Gwen run again, or will she face her past and fight for Dale?

EXPOSED is a sweet contemporary romance about a brave woman and a heroic man who fulfill their dreams. If you like heartfelt characters, deep topics with powerful emotional cores, and happy endings, then you’ll love this fifth book in Lyz Kelley’s tales of strength, love, and survival. A 26K word, 100+ page novella.

What happens when you realize too late that you’re in love?

Karly’s animal shelter business is failing. Right now, she has too many animals, and not enough foster parents, trainers, or adopters to keep food in the bowls, and she’s desperate to find options. When her first love returns home from Afghanistan wounded and alone, she offers Thad a win-win situation—a job in exchange for training a special needs dog.

Thad wants to be left alone. He feels responsible for not spotting the IED before it killed his friends and his war dog. When Karly drops off a dog for him to train, memories of their deaths swamp him with guilt.

Corruption is tearing the small town of Elkridge apart. Thad is brave enough to give his life to save Karly, but is he brave enough to live? Will she be strong enough to survive? Will fate allow them a happily ever after?

RESCUED is a sensual, contemporary romance about a brave woman and a heroic man who fulfill their dreams. If you like heartfelt characters, deep topics with powerful emotional cores, and happy endings, then you’ll love this sixth book in Lyz Kelley’s tales of strength, love, and survival. Buy RESCUED to unlock the emotional tale today!

About the author: Award-winning author Lyz Kelley resides in a small community in Colorado with her husband and several four-legged family members. She’s a lover of board games, gardening, and painting, a disaster in the kitchen, a compulsive neat freak, and tea snob. She loves writing about strong women who have endured challenges and the men who enrich their lives.

A healing love is at the heart of her book series. Creating wounded yet amazing characters—discovering what drives them, frightens them, heals them, makes them laugh—is what gives her joy. Lyz is pleased to share that joy through her masterfully written stories.

To keep tabs on her award-winning novels, connect with Lyz by signing up for her newsletter at LyzKelley.com. Members receive an exclusive copy of Regrets learn about thoughtful giveaways, and get a sneak peek at upcoming releases. Members may even get the opportunity to receive advanced reader copies. Check out LyzKelley.com for more information.