Who knew sleeping with the enemy could be this fun…

Was the one night stand a good idea?

Well, no. Probably not in retrospect.

In my defense I had just moved back into my grandparent’s house, I’d lost my dream job, and a guy on Tinder had stood me up. It was like life had suddenly stamped ‘LOSER’ on my forehead.

So when the guy behind the bar started giving me THE look…you know, the one that promised I’d be screaming his name into the wee hours of the morning? When that guy also has the perfect amount of scruff on his chiseled chin, biceps bulging out of his t-shirt, and a cocky grin you knew he’d earned in the sack…when he gives you that look, you don’t bother to figure out what your six degrees of separation are. You jump on that horse and ride it!

Pun fully and completely intended. And accurate by the way.

I fully admit to feeling sorry for myself and acting impulsively, but by the time I’d figured out WHO the bartender was, I was already falling for him.

Who knew a bad boy could mend a broken heart…

What does a girl do after she discovers her fiancé is a cheating bastard?

In my case, I performed the ritual implosion of all scorned women. I drowned my sorrows in cases of white wine, wallowed in gallons of ice cream, and ignited a bonfire to burn away every damn remnant of his existence. Six months later, the only result was a permanent impression of my ass on the couch.

Adventure Dating my friends dared.
A new and exciting opportunity they said.

I thought they were crazy, but I’m not one to back down from a challenge, so I signed up for the entire four-week deal.

That’s where I saw HIM. Lucas Cummings. He isn’t the classic rich boy I usually end up with. The one whose idea of working up a sweat is waiting for his margarita to be served beachside. Nope. He’s a rough and tough bad boy that all fathers warn their daughters about. You know the type. Cocky swagger, chiseled jaw—the ‘V’.

SOLD, I said to myself, until I discovered he was so much more than just a BOXER.

Left Hook.
Right to the heart.

Who knew my brother’s friend could be Mr. Right, and not just Mr. Right Now…

My brother refused to introduce me, so I blame him. If he’d just caved, and introduced me to Jasper, I wouldn’t be in this mess. I mean, really, what’s the big deal? I’m not interested in the guy’s looks.

Oh no, I want his cold hard cash. (Be honest, you were expecting that other four letter ‘c’ word weren’t you?)

Now, before you go getting all judgy, I’m not a gold digger. I have a legitimate business opportunity for Jasper to invest in. The problem is that my stick-up-his-ass brother is embarrassed that his twin sister invents kick ass sex toys. His problem, not mine.

So, I took matters into my own hands. Defeat isn’t a word in Lennon Hart’s dictionary.

Using my stealthy P.I. moves, I narrowed my search to a time and place where I knew I could find him. It was completely innocent. A chance meeting that would give me the opportunity to pitch my business.

It wasn’t until I sat down across from the gorgeous panty soaking man in front of me, that I realized I wanted so much more than just his money. I could very well want his heart if I wasn’t careful.

Apparently my P.I. skills aren’t as stellar as I thought because Jasper had his own secret—and it changed EVERYTHING.

Too loud.
Too clingy.
Too much make-up.

I could go on and on. The other guys in the Single Dad’s Club would say I’m obsessed with finding them. But none of their kid’s mothers call a maximum-security prison home either, so their opinions mean shit.

Caterina Santora has her own list of red flags…

Even after repeating this mantra to myself every morning on the way to Lily’s summer camp, guess what happens the moment I see Cat? Yeah, that mantra turns into ride me, doggie style and reverse cowgirl.

The fact that she doesn’t remember me from six years before grates on me until I don’t have it in me to leave her alone any longer. I have to have her. But our lives are opposites in every way. In no way compatible.

When we’re together all the complications fade away and I have to keep reminding myself, even if I can have her— I can’t keep her.

Secrets and lies are a killer way to start any partnership—especially a horizontal one.

Now, I’m a glass half full kinda of guy, so, after the ‘you’re fired’ speech was directed at me, I figure now’s the time to be the screenwriter I came to sunny California to be. Unfortunately, there are about as many people trying to sell a script in L.A. as there are vegans in the pacific northwest.

But lucky for me, a few weeks ago my agent found an investor for my script. Hooray, all my problems are solved! NOT.

Because the investor will only agree to fund my film if I use one specific actress. And that one specific actress? Well of course, it just has to be the same actress I screwed over only months before. But she doesn’t need to know about that one tiny detail, does she? All that matters is getting her to agree to do the film and I’ll do whatever it takes. We can leave the past, in the past, right?

I thought my charm would win her over. Never would I have been prepared for the terms she laid out on the table.

She needed a nanny.
I needed a lead actress.
Somehow I became The Manny. 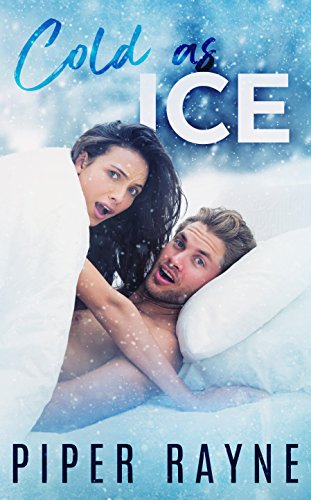 It may be Winter Games, but the bedroom games are about to begin…

Competing in South Korea on the world stage is hard enough.

Having to spend the entire press tour beforehand with a woman who hates me?
Karma really is a bitch.

While she’s spent the last four years loathing me, I’ve spent them ignoring the guilt that gnaws at my stomach.

All Mia Salter cares about is that I’m her brother’s ex-best friend and it’s her duty to hate me. The funny thing is, I barely noticed her back when she was trying to keep up with us on the slopes. Now, as both of us prepare to go for gold, I’m seeing her in a whole different light—and it involves a whole lotta different positions.

No one said the path to the Olympics would be easy.

About the Author: Piper Rayne is a secret co-writing duo of two USA Today Bestselling authors who write romantic comedies together full of heat, humor, and heart. We both have kindle’s full of one-clickable books and we love creating hot heroes, quirky heroines who make us laugh with lots of sexy times thrown in the mix. Here’s hoping you do, too. LOL Join our newsletter to receive two exclusive books on us!