When I was dead, all I wanted was to be alive. Now that I’m human again, all I want to do is die.

Being alive is tough. Especially after three hundred years of being a vampire. But now that I’m human again, I’ve decided to do what any nineteen-year-old human girl does—go to university. I thought it would be a breeze … after all, how many other students have my kind of life experience?

But after being a human university student for exactly one day, the only friend I made—an old librarian who was kind to me—was murdered. And not just murdered—ritually sacrificed. Looks like I’m going to have to dust off my old huntress skills and test them out in a human body.

My name is Katrina Darling—ex-vampire, re-human-ated university student and totally pissed off. 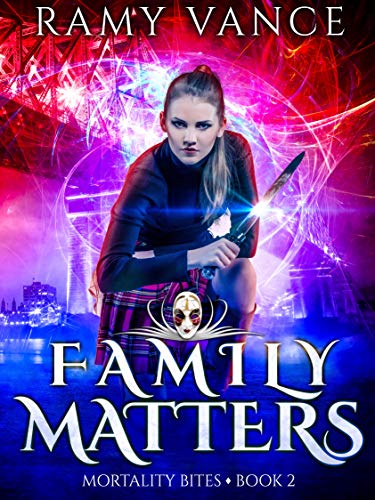 You may be done with the past, but that doesn’t mean that the past is done with you. And when you’re a three-hundred-year-old ex-vampire, you’ve got a lot of past to deal with.

Not the least of which is your mother. A mother who should have died a few centuries back. A mother who, in a fit of confused adolescent need, I turned into a vampire. Over the centuries we’ve had our fights. And by fights, I mean the murderous, knife-through-the-heart, cut-off-her-head kinds of fights. You know, typical family stuff.

But now that the gods are gone and we’re both human, I guess it’s time to let bygones be bygones and be a family again.

The only thing is, with so many bygones it’s hard to forgive and impossible to forget. All I want to do is be a normal university student, doing normal human stuff. You know: date the resident hunk, study, date some more.

Best to keep Mom’s visit as short as possible.

But when a stalker from our past interrupts our little dysfunctional family reunion, I’m forced into a fight that could very well get me, my boyfriend and everyone I know killed.

Sure, family matters—but so does breathing.

If you like Linsey Hall, Shannon Mayer, CN Crawford, Ilona Andrews, AL Knorr, or Patricia Briggs, you will LOVE the SECOND installment of the MORTALITY BITES. 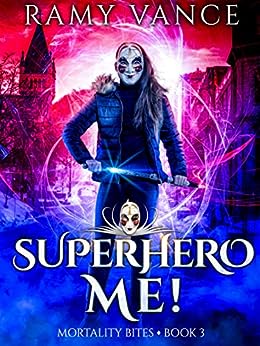 What’s the expression again? “With great power comes a great pain in my ass.” And in a world where just about everything but superheroes exists, the last thing I expected to see was one flying around the park behind my dorm.

I mean, isn’t it enough that this GoneGod world is filled with ghosts and demons, angels and valkyries, pixies and dragons? Do we really need souped-up humans, too? Come on!

But that’s just the thing: superheroes don’t exist. Or at least, they shouldn’t. So when all sorts of superheroes start popping up on campus, fighting amongst themselves with such ferocity that they’re threatening the city, I have to adorn my own mask and cowl to figure out what’s going on.

I’m Katrina Darling, a three-hundred-year-old ex-vampire who believes in ghosts, but not superheroes.

If you like Linsey Hall, Shannon Mayer, CN Crawford, Ilona Andrews, AL Knorr, or Patricia Briggs, you will LOVE the THIRD installment of the MORTALITY BITES.

About the Author: Ramy Vance lives in Edinburgh with his wife, a three year old monster and an imaginary dog, where he enjoys a beautiful city, whisky (Scottish spelling, not mine) and long walks. When he's not going for walks in the Scottish countryside with his imaginary dog, he will most likely be writing stories set in the Mortality Bites universe, as he frantically tries to drown his fatigue with coffee. In the long run, Ramy hopes to get a real dog so that he can have an excuse to go on even more long walks. But for now the made-up one in his head will have to do.