Enter a world of temptation and lust,
where rock stars are not only gorgeous and sexy, but they're also vampires.

Cian DeMarco, has lived in his beautiful mansion overlooking both the San Francisco Bay and the Pacific Ocean for the past seventy of his two-hundred and twenty years of existence. Happily–or so he thought, preying on a different woman as often as his heart desires. But when Magdalena sits down at one of the front-row tables in Club Royal where he and his band mates perform once a week, the scent of her blood has him completely undone and he's unable to contain his desire for her.

Magdalena De la Rosa has a new job and a gorgeous apartment in San Francisco. Everything is just the way she's imagined it could be… until she and her girlfriend find their way into an up scale night club and she's suddenly swept off her feet by a member of the rock band. Mesmerized by his gaze, his scent penetrates and embraces every cell of her body and she can't deny her own desires for him.

A temptation they can't resist, leads to a future they never imagined as sparks ignite between the two until a threat from Cian's past returns to wreak havoc on Cian's and Magdalena's lives.

Captivated by a Vampire (Immortal Hearts of San Francisco, Book 2)
$0.99

She's a vampire. He's human and the best investigative reporter in the city. Their worlds mix as well as oil and water, but their attraction to each other is electric.

Josh Barrett knows his priorities—reporting the news as quickly and accurately as possible by day, drinking himself into a self-loathing stupor by night. His workaholic tendencies can’t completely mask the broken, depressed man he is inside. The horrific night that changed his life forever and left him broken-hearted and alone is forever fresh in his thoughts. But the torture is no less than he deserves. Until a beautiful, sexy, and utterly mysterious woman enters his life and changes everything. Chelle is absolutely enchanting, her allure captivating and the reporter in him is determined to learn all of her secrets.

Newly turned vampire Chelle Masterson only wants to find her place. Her unrequited love and devotion for her maker Lane has left Chelle broken, vowing to never fall for any man again. She’s determined to find her way in the scary new world of the immortals and begs for the chance to prove herself—to prove that she’s capable of surviving without the others. Unfortunately, she meets trouble head-on with her very first victim and ends up face to face with a very charming and handsome stranger. He seems to only want to help, but can she trust him?

As Josh slowly wins Chelle over, she decides to utilize his skills as a reporter to help uncover her past—a dark past that she cannot remember, but one she desperately needs to learn. Being around him is addicting, their connection undeniable, and she finds her will to keep him at arm’s-length dwindling.

The simple act of a Good Samaritan spirals into an obsession—much more than either of them thought possible. Their love becomes unfathomable, but it may not be enough to overcome the hurdles standing in their way…

*This read is recommended for ages 18+ due to mature content.

Rocked by a Vampire (Immortal Hearts of San Francisco, Book 3)
$0.99

He’s dangerously sexy, insufferably arrogant, rude, and complicated as hell, yet what he reveals to her makes it impossible to stay angry and she can’t stop her growing desire for him.

They rock each other's worlds, but when evil comes knocking at their door, someone will need to die or they’ll lose each other forever.

Possessed by a Vampire (Immortal Hearts of San Francisco, Book 4)
$0.99 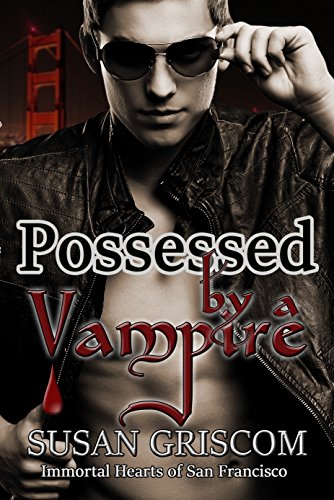 They possess the power to make their dreams come true—but it won’t be easy.

Preston Knight—Elvis to his friends—loves being a vampire. The night he was turned was the first step to him becoming the kind of man he always hoped to be. Now, he’s a rock star. What could be better? But the one thing that would make his world complete is just out of reach. The woman he yearns for has some serious secrets, and despite him knowing that she wants him just as much as he wants her, she won’t let him in.

Lily Grey never asked to be a vampire. The choice was taken from her eons ago, and things never improved. Now, she finds herself peddling drugs on the streets of San Francisco and playing the part of doting wife to a possessive and sadistic vampire with delusions of grandeur. But family means everything to Lily, and she’s willing to sacrifice everything for it…even her one chance at happiness with the sexy-as-sin vampire who sets her heart ablaze.

When one night of passion opens the door for a century of secrets to be revealed, Lily and Preston must fight for not only what they believe in but also what they love.

Sometimes the only way to salvation… is to take a leap of faith.

Jackson Beaumont prides himself on being a nature-loving, guitar-strumming, carefree sort of guy. When the mysterious Lena Benton walks into his bar looking scared and defeated, it's not something he can ignore. He's immediately consumed by concern for her and driven by his desire to help. She's just so beautiful. So wounded.

After being shuffled from one foster home to another growing up, Lena Benton dreamt of finding her prince charming. When the captivating Troy Harington sweeps her off her feet shortly after high school graduation, she's certain she's found her happiness. Unfortunately, Troy's true colors surface shortly after their marriage and things turn ugly. Lena only has one choice. She has to leave him. She has to run…

Lena's escape has brought her to Jackson, and he clearly wants to be there for her, but can she trust anyone again after what she's gone through? And will Jackson be able to help her heal without losing his heart?

Sex with no strings. That's the way Brodie Beaumont likes it. He uses women and they use him…

Suave, handsome Brodie Beaumont has a history of using and being used by women. A past he doesn't like to talk about has turned him into the type of guy he is today, but he hasn't really cared. Until the beautiful and feisty Gabrielle Demeres comes back into his life.

Gabrielle learned the hard way what type of guy Brodie was the first time she met him. His crude seduction attempt earned him a slap to his face, and Gabrielle wasn't exactly looking forward to another encounter with the cad. Unfortunately, her best friend was marrying Brodie's brother, and Gabrielle and Brodie would be forced to spend time together whether she liked it or not.

As things in the small, quiet town of Turtle Lake take a decidedly dark and dangerous turn, Gabrielle and Brodie only have each other to turn to. Will they be capable of over coming their aversion to one another while coping with their own troubled pasts and dealing with the current dangers surrounding them? Or is their hostility just skating the fine line between love and hate?

Contemporary Romance 18+ due to adult situations

About the Author: Susan Griscom is a huge fan of superheroes and bad boys confronted with extraordinary forces of nature, powers, and abilities beyond the norm mixed with hot, blow-your-socks-off romance and spends many hours daydreaming about them.

Her muse is a ghost with a heart full of emotion that she sometimes finds difficult to control. She's often fueled by chocolate and coffee, and on occasion, wine.