A New Twist On Vampires with Rogue Alliance 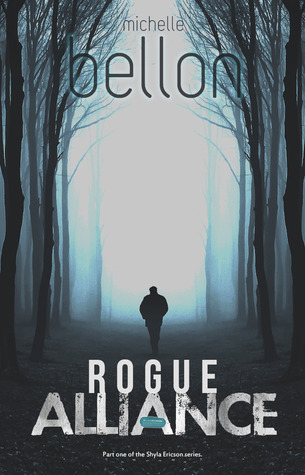 Trying to escape a horrific past, Shyla has immersed herself in life as a tough, sassy cop in the bustle of LA. When the case of a lifetime takes her back to her hometown of Redding, she is thrown into a world of organised crime, deceit, and bitter reminders of her childhood.

As Shyla’s path crosses that of Brennan, an unwitting and troubled sidekick to the ringleader she’s intent on taking down, she is forced to re-evaluate everything she believes about herself, her job, and what she knows about right and wrong.

Can she face the demons of her upbringing and learn to trust again? Her life will depend on it.

Praise for Rogue Alliance: “Bellon gives a whole new twist to the vampire story…I loved it!” “Rogue Alliance is in one word, Amazing!!” “Kept me on the edge of my seat the entire story…”

“I’ve been watching you. It’s a good thing too, or else you’d probably be dead right now.”

She ignored his clipped tone, but was all too aware that his anger was simmering. What the hell was he so mad about? She was the one who had just endured a physical attack.

“Oh, that’s an exaggeration,” she said, “I was managing. He caught me off guard but I had it under control.”

“Yeah, sure and you’re not drunk either, right?”

“Oh, no,” Shyla laughed, “I’m drunk all right. But I’m tired of this conversation.” Irritable and woozy, she opened the door and marched out of the car towards a gravel path that cut through the woods. In seconds, Brennan was back beside her.

“Where do you think you’re going?”

He spun her around and she nearly toppled over. He grabbed her by the front of her shirt, pulling her closer, in a hold resembling the one he’d just had with her attacker.

She didn’t like to be grabbed like that. With as much force as she could muster she slapped him across the face.

Her breath was coming in short, quick gasps. She was mad at the world and especially at men. Why did they always have to push her over the edge? When she tried to turn away her grabbed her again and spun her around.

“Just leave me alone,” she wailed as she started slapping him over and over again on his chest and arms, each one stinging her hands. It felt crazy and horrible and sensational all at the same time.

His arms crushed her in a vice grip, pinning her arms down to her sides. She flailed and kicked to no avail as he stomped down toward the lake. One moment she was in a fit of rage, the next she was completely submerged under the icy waters of the lake.

She came up spitting mad and gasping for air. He hauled her up by the shirt.

“Settle down or you’re going under again,” he warned.

She kicked out in fury and down under the frigid waters she went. By the third dunk, she was sobered quite thoroughly and realized it was useless to fight him. He was too strong for her and determined to win.

“Fine!” she screamed out as she came up for air the third time, “Fine, I’ll stop. Just don’t dunk me again.”

Michelle currently lives in the Pacific Northwest with her husband and their four children.

She earned her degree as a registered nurse in 2005, but found herself back in the home a few years later when she and her husband welcomed their fourth child into the world and so began her writing career.

She writes YA, romance suspense, and women’s fiction. She has published four novels and won the Pinnacle Book Achievement Award last year for her young adult novel.

Our interview with Michelle:

Tell us about your book. What makes it worth reading?

Rogue Alliance is book one to a two part series.

One day while I was daydreaming, an entire scene came to me. It was a very intense scene with both main characters who eventually became Shyla and Brennan. In that one scene I got a sense of their complicated relationship, their past, and their flaws and struggles.

As I brainstormed an entire book was born so I began writing.

What makes them worth reading is the fact that it’s a whole new twist on the vampire story. When I decided that I wanted Brennan to be a vampire, I knew I didn’t want to tell the same old story that’s been done over and over again, so I came up with a different way to approach it. I can honestly say there is nothing like it and that’s what readers are really enjoying about this novel. That, and Brennan is just so hot! You can’t help but love him.

How long have you been writing and what inspired you to do it?

The main thing that inspired me to write was my basic love for books and the stories within. I’ve been an avid reader, of most genres, for my entire life. I’ve toyed with the idea of writing a book for a long time but didn’t believe that I had the capability to do such a monumental task. In my mind, writers were always god-like. I mean, I’d wonder, how in the heck could they come up with such creative ideas and characters and then synthesize all of that information into a full, comprehensive story? It was just too amazing.

Then one night I had a dream. It was very vivid and when I woke up I knew it was a story that should be written down. So I got up and jotted down some notes then went back to sleep and that was that. The next day that dream haunted me. I knew it should be a book. But I doubted that I could do it. But after that dream came another dream and another. Finally, I decided to stop doubting whether or not I could do it and made the decision to do it anyway then wait to see what happened. Six months later I wrote THE END and couldn’t believe I’d done it. Granted, it was a complete mess and needed to be rewritten and edited within an inch of its life, but by god it was a book!

I think it’s the fact that they are so human yet not. They represent the darkness that is within all of us. There is something about their strength mixed with their inner torment that really turns us on. It’s exactly why I love all mythical type figures. I love vampires but I also love superheroes. In fact I’m obsessed with Superman. It’s a little quirk of mine. The reason I mention it is because it falls under the same category. As a woman, I love the concept of a very strong male figure, practically invincible, but he also has a tender underbelly. Superheroes and vampires all struggle with darkness, their inner demons, and loneliness. That combination is extremely intoxicating to women and they imagine being that figure’s weakness. It’s hard to explain, but it’s definitely a phenomenon.

What are you reading right now? Would you recommend it?

I have to admit I don’t get nearly as much leisurely reading done these days as I’d like to. I do read quite a few books for the purpose of writing reviews for other authors though.

Right now, all of my focus is on raising four children and writing book two to this series. I hope to be done by summer!

The vampires are attacking! Grab the first thing you see to your right and hit them with it! What was it? And how do you think you did in the ensuing fight?

The first thing to my right is a plant. Agh, I think that means I’m dead. Maybe I could give him a flirtatious smile and he might spare my life? No? Oh damn. Yep, I’m dead. lol.

The afore mentioned vampire attack didn’t go so well and you were bitten by the vampire…now what?

In the event of a zombie apocalypse what item would you make sure that you took with you to your underground safety bunker? (we will presume that your family are already safely in the bunker!)

Chapstick! I’m addicted. It’s a problem. I should seek help.

Can you give us three, scandalous facts about yourself you wouldn’t even want your own mother to know about 😉

I definitely can’t answer this question cause then I’d have to kill you. Not really, but yeah, I’m not giving away my secrets. 😉

Can you give us five random facts about yourself?

Sometimes I can’t believe I’m actually a grown up. Whose idea was that?
I curse. A lot! (Do people even say curse anymore?)
I’m a registered nurse.
I can’t sing but I do anyway. In fact, if there was one talent I could have it would be to sing.
People who can’t drive worth a damn give me serious road rage. I’ve had way too many close calls because of those dang soccer moms who are talking on their cell phone and breaking every rule of the road possible. Makes me nuts.

Where can readers find your books?

Right now we are only on Amazon because we just finished a promotion but we’ll go back to other sites soon, like Barnes and Noble and Smashwords, etc.

Is there anything you would like to say to your readers?

Thank you for all the support. Every time I hear from a reader via my website contact page or on Facebook and they tell me how much they loved the book and can’t wait for the next one, it makes all the hard work worth it!