A Lighter Shade Of Pale

Having youthful good looks, a billion dollar fortune and the ability to charm any woman on the planet certainly makes existence a lot more fun for vampire bachelor Damian Ward.

Knowing it is impossible to ever have a normal relationship, Damian has resigned himself to a life of parties, women and casual sex.

And he is loving every minute of it.

However, everything changes when a routine one night stand with a beautiful young woman called Leah results in her becoming pregnant.

It should be biologically impossible for Damian to ever impregnate a human and he knows that if it was to ever happen then such an event could only mean one thing.

The beginning of the end…

USA Today Bestselling author Shannon Mayer introduces two of her most beloved characters in this first in both series novella. This story takes place prior to The Rylee Adamson Novels and The Elemental Series and introduces you to both Rylee and Larkspur.

“My Name is Rylee, and I am a Tracker”

This is the story of my first salvage, seeking out a missing child that my mentor has warned me away from.
What I find is more than one child: I find my destiny.

“My name is Larkspur, and I am an Elemental.”

They call me The Destroyer. I've been banished to the desert for years after saving a life I should have let the darkness take. But as an earth elemental, I couldn't turn from the pleas for help any more than I can turn from them this time. Except that this time, I have a Tracker to deal with.

This is about to get interesting.

Full series boxed set on sale for .99 for a limited time!
These three werewolf brothers are ready to fight for the curvy women of their dreams…

Lucas Vale has been in love with the same woman since he was a teenager, but they were torn apart by circumstances they couldn't control. Now she's the prize in a fighting competition for male alpha wolves, and Lucas is just the man to win it all. He's a professional fighter and extremely tough. The only problem? He wasn't invited…

Jordan Vale is great at fighting and bad with crowds. When he's assigned a PR coach, he isn't expecting sassy, curvy Senna, who keeps him on his toes and makes the wolf in him howl. But Senna's hiding secrets, and there's someone on her tail that only Jordan could protect her from. If she doesn't run first…

Asher Vale is protective. Too protective. He's been watching out for Laurel Mason for so long that he doesn't realize she's ready to find a mate, and that mate is him. Asher feels torn between his duty to her family and his duty to his own heart, but he's not the only male with his eye on Laurel…

Talia Barca needs a date. Badly. She uses the services of the Paranormal Dating Agency hoping for a decent guy to take to a family wedding. A wedding her ex-husband has wormed his way into as a guest.

Connor and Theron want Tally to complete their Alpha triad. She's sexy, curvy and funny. But she's human. And they're not sure she'll go for a relationship with two men at the same time.

As if deciding to give two men a shot wasn’t difficult enough, Tally will also need to deal with a threat from the pack. She'll either prove she's strong enough to be an Alpha mate or find herself at the mercy of a vicious opponent.

The Flame and the Arrow 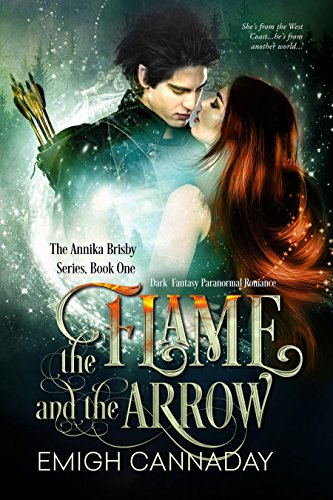 Aspiring rock star Annika Brisby thinks she knows where her life is going until she steps through a broken portal that leaves her stranded in a realm of fairies, vampires, and other mythical beings. Unable to return until it's repaired, she's rescued by wood nymphs who believe her sudden arrival is no accident. After being taken in by a prominent family of elves, Annika finds herself struggling to resist the seductive spell of their youngest son,Talvi. Equal parts arrogant and alluring, the notorious heartbreaker seems like the perfect distraction for her homesickness. Her new friends warn her that she'll probably regret ever laying eyes on him,and what begins as a casual fling quickly burns too hot to handle. By the time Annika learns the consequences of their forbidden trysts,Talvi's already under her skin and dangerously close to her heart. But on the journey home she discovers that there's a mountain of secrets that he's not telling her, and Annika can't help wondering who's really in danger.