Curse Of The Witch From Jessica Wayne!

New Release Curse Of The Witch is Book 4 in The Vampire Huntress Chronicles from Bestselling author Jessica Wayne. 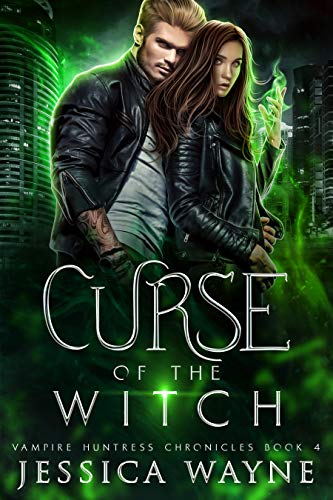 Her death was just the beginning.

Two years trapped between the living and the dead would make anyone jumpy. But soon Delaney realizes the shadows surrounding her are more than light casting shapes upon the wall. Someone is hunting her, and they won’t stop until she’s back in the ground.

Cole left his heart in an alley two years ago when he walked out covered in the blood of a hunter he would have died to protect. Now that she’s back from the dead, he’s determined to keep his distance. After all, if he lost control once it could happen again.

When Delaney’s life is threatened, Cole knows he can’t ignore the call. Even if answering it could mean death for them both.

Shifter meets witch in this epic battle for the soul of Delaney Astor. Perfect for fans of Lynsay Sands, Kelly St. Clare, McKenzie Hunter, and Jennifer Ashley, Curse Of The Witch will take you on a brand new adventure with characters you know and love.

Get Your Copy Here

Excerpt from Curse of the Witch:

Never in my entire existence have I ever felt suffocated in my human form. But ever since Delaney came back, being a human feels more like a prison sentence. I find myself longing for the freedom I get when I become more animal than man.

The guilt is less in that form, my pain less; everything is fucking less, simpler. Even as the predator in me longs to claim Delaney, I feel more in control on four legs than I do on two. And as I run through the trees, the only thing that matters is the wind in my fur and the dirt beneath my paws. The sound of bones cracking fills my ears as I shift within a matter of seconds.

Soon, I’m racing through the trees, running toward nowhere in particular, my only goal to get the hell away from everything and everyone who feels the need to pressure me into doing something I know in my gut would be worse in the long run. There’s not a damn good thing that can come of my telling Delaney the truth. All it would do is erase the already blurred lines between us. Senses on high alert, I pay close attention to my surroundings, listening for anything that feels off.

Nothing should be able to reach us here, but I’ve been around long enough to not rely solely on witch magic alone. A ward is powerful, but as evidenced by what happened at Bronywyn’s cabin, they can be broken.

Through the sound of roaring water up ahead, I slide to a stop when a heavy thump and grunt fills my ears. A feminine sob rips through my consciousness and calls to the animal inside me. Unable to stop, I switch direction, tearing through the trees toward it, my wolf determined to see what made the noise.

If it’s an animal, I’ll kill it. Put it out of its misery.

And if it’s a human who managed to slip past the boundaries, I’ll terrify it enough it disappears. I catch her scent and pick up the pace, snarling as I run toward the sounds, making a mental promise to fucking tear apart whatever is causing her pain.

Another soft thud, this one a bit louder, is followed by a string of curse words that has me sliding to a stop at the edge of the clearing. Delaney stands in the middle while the copper tang of her blood hangs in the air. I shift quickly, racing toward her to find the source of her injury.

“What the fuck are you doing here?” She whirls on me, knuckles shredded.

“Nothing. Now go the fuck on.” She turns back to the large tree beside her and balls her fist before slamming it into the bark. Blood smears the wood, and I glare at her, crossing my arms.

“What the hell are you doing?”

“What does it look like I’m doing? I’m attempting to keep from kicking your miserable ass.”

I can’t help myself, I laugh, not at all helping the situation. Delaney turns and stalks toward me, both hands clenched at her sides, and the amusement dies in my throat. Not because I’m afraid of her but because the intense look in her eye is bordering on lust, and I want nothing more than to pin her against a tree and fuck her until neither of us can walk.

“No.” I cross my arms as my wolf crawls beneath my skin, begging to be let free. See, he’s sensed her blood too, and he wants it nearly as badly as I want her body. Her mind. Her soul. “I apologize for keeping you out of the meeting today.”

She turns and glares at me. “I should have known it was your idea.”

“You haven’t exactly given me faith that you’ll work as part of a team.”

“What the hell is that supposed to mean?”

“I don’t know, Delaney. How about the fact that you wouldn’t come to me when you needed help, that letting yourself die was better than asking someone else for help. That having your throat ripped out and choking on your own blood was better than letting me in.”

“Thanks for the visual,” she replies dryly. “But I didn’t exactly need it since I am the one who suffocated as my lungs filled with blood.”

My stomach twists, and I swallow down bile at the image of her dying. “Because you didn’t want to ask for help.”
“No!” She screams. “Because I couldn’t ask for help. Because I had voices in my head telling me that they would force me to do terrible, unspeakable things to you and everyone else I loved if I didn’t listen to them.” Tears slip down her cheeks. “Do you have any idea what it was like? To be fed images of me killing everyone I love?”

Swallowing hard, I flex my fingers as I fight the urge to reach for her. To comfort her. But I don’t because, truth be told, I have no idea what she was going through.

For the first time since I found out the truth, I can see the agony she must have been in. That feeling of being backed into a corner, unable to fight for what you want. It’s something I know well, and somehow recognizing that pulls me back just enough to see it from her perspective.

She’d told me once how she didn’t want to include Rainey in everything because her little sister wanted a normal life. So, instead of getting help, she’d carried the weight of the Astor name alone, shouldering the duties that came with being a hunter in a city like Billings.

Her entire life has centered around the duty others pushed her into. First her parents, then her grandmother, and finally—her love for Rainey. Everything must have felt so out of her control.

So why the hell am I so surprised she wanted to die on her own terms?

Bestselling author Jessica Wayne writes paranormal and fantasy romance. She lives in Texas with her husband, three kids, and their two dogs.

She is skittle obsessed, enjoys the occasional whiskey, and is an ambassador for the mix-matched socks movement.

A believer in true love, Jessica also believes that good things are worth fighting for, and sometimes you have to risk it all to find your place in the world. You can find more information about her books by going to www.jessicawayne.com.

Q: Hi Jessica! Tell us a little more about yourself.

JW:  Hi, everyone! I am a skittle-obsessed, coffee-addicted, wife, and mom of three, who loves to write steamy, paranormal romance that turns the genre on its head. I live in the great state of Texas, spent seven years in the Army, and have been writing since I was a teenager.

Q: Tell us about your publishing journey. Did you always want to be an author?

JW:  I did! Reading and writing has always been such a huge part of my life, and I’d always dreamt of bringing stories to life.

Q: Why paranormal? What drew you to the genre?

JW:  I LOVE fantasy, but I also love modern times. So being able to twist reality and include powerful creatures into our world has been such an awesome journey.

Q: What’s your favorite type of paranormal creature and why?

JW:  DRAGONS! They are powerful, gorgeous, and cool AF.

Q: For those who are new to your books, what is the story about?

JW:  The Vampire Huntress Chronicles follow supernatural hunters as they struggle to find a balance between their duty and what they know to be right. The latest in the series, Curse of the Witch, follows Delaney Astor, a hunter who was killed two years prior. She’s back now, but things are
far more complicated. Especially when she discovers the man she’s loved for her entire life–a shifter no less–has been keeping one hell of a secret from her.

Q: Tell us about your heroine. What inspired her quirks and struggles?

JW:  At her core, Delaney wants to be loved. She wants a partner, someone to stand beside her and fight for the future of their city. She’s lonely, and steadily coming to terms with who she is now that she is no longer in the body she was born into.

Q: Tell us about your hero. What motivates him?

JW:  Cole just wants his life to untangle. He’s frustrated, angry with himself, and terrified he’ll lose control and kill the one person who means the most to him.

I can’t wait to read it! Thanks, Jessica!

The Trifecta by Jane Biteme!